Too Much and Never Enough: How My Family Created the World’s Most Dangerous Man 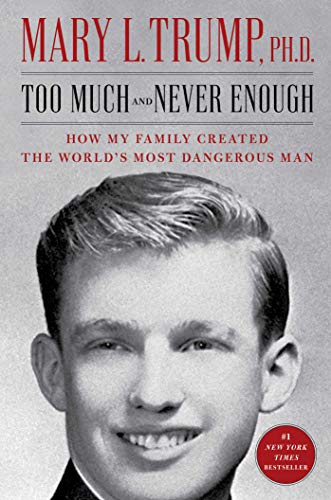 “. . . this book is a remarkably compassionate story of emotional family horror from which neither uncle nor niece could easily escape.”

Part memoir, biography, and clinical case study, Too Much and Never Enough hits all the right notes. It is deadly serious, achingly sad, grave, chillingly surreal and though deeply psychological, reader friendly and even humorous at times. For those who are wise enough to heed its warnings, it is also a cautionary tale of how the tsunami of relational dysfunction washes over families generation after generation and how those in its path become its victims.

While initial excerpts from the book made it appear to be a mean-spirited compilation of the president’s greatest bloopers, it is actually an in-depth, insightful, intelligent analysis of how he came to be who he is today. Readers seeking a presidential roast might be disappointed, as anecdotes showing the president at his worst are as heart-wrenching as they are humiliating. Sadly, no one can make him look as small as he manages to make himself look.

This book is a remarkably compassionate story of emotional family horror from which neither uncle nor niece could easily escape. Donald J. Trump’s family history is intimately intertwined with that of the author, his oldest brother’s daughter, Mary L. Trump, who has been the proverbial fly on the wall since childhood. To tell this story, she deftly juggles the roles of curious, empathically detached psychologist, victimized family member, and witness to the ongoing cruelty and abuse that her uncle and grandparents inflicted mostly on her father, but on her mother and brother as well.

Mary Trump stands alone, as none of the president’s three (living) siblings have been brave enough to speak out against him. After years of research, she wrote this book and then was berated for not having warned us sooner. By publishing it now—four months before the most critical election of our lifetime—she helps the electorate understand how they have been preyed upon and played by a man who never grew up. Ironically, the book’s title mirrors both public sentiment that she failed to do enough and the family’s concern that she was sharing too much.

If she is bitter, it fails to eclipse other emotions. And even if she is, it does not preclude her from telling the truth. Psychotherapists and other experts (See Trump on the Couch: Inside the Mind of the President, and The Dangerous Case of Donald Trump: 27 Psychiatrists and Mental Health Experts Assess a President, both reviewed at NYJB) understood from the get go that the president had deep-seated mental health problems and was never going to become a team player, govern by the rules, or stop being anything other than prideful and power hungry. But because hope springs eternal, many people clung to the notion that he would change and become a wiser leader, a nicer man. Like the pattern-seeking psychotherapist she was educated to be, Mary Trump lays out the president’s familial history so that readers can see for themselves that, sadly, such change was not possible for him.

He didn’t change because he couldn’t, any more than any of us can rewind our histories and script a happier version of them. Dr. Mary Trump understands that things could not have happened any other way for the president or, for that matter, for any of us because that is simply not the way the world works.

Brick by brick, she lays the foundation for understanding her uncle’s limitations, starting with diagnosing his father, Fred Sr., as “a flat out sociopath.” Fred Sr.’s father, Friedrich, was born in Germany which he left in 1885 to evade compulsory military service (a duty grandson Donald also dodged) and immigrated to the U.S. to make his fortune by becoming a builder.

When Friedrich died of Spanish flu, Fred Sr. at 12 years old, had his childhood cut short as, by default, he became the man of the house. At 25, he married Mary Anne, also an immigrant. Of them, the author says, “Whereas Mary was needy, Fred seemed to have no emotional needs at all.” Nor, as she points out, any empathy. His wife, the youngest of 10 children, had serious chronic medical problems that made her unavailable physically and emotionally to her children. Between the two parents, the Trump progeny suffered enormous emotional neglect and abuse, from deprivation to enabling, making it hard for them to turn into mentally healthy children and adults.

When firstborn Fred Jr. failed to live up to his father’s rigid idea of manliness and success, Donald grabbed his chance for love, attention, and approval, of which he’d received so little from either parent. By watching his father degrade and humiliate Fred Jr., Donald set out to be the opposite of his brother and became as detached from authentic feeling as his father was. At his father’s knee, he was groomed to shield his vulnerability, go for the jugular, and win at all costs. Fred Sr. thrilled to have an heir so like himself, lied, cheated, and enabled his son’s unethical behavior to make him look like a winner no matter what Donald did.

The author provides a host of personal anecdotes and stories told to her by family members that show her uncle growing into the bully, showman, and manipulator he is today. She researched business and financial records of her grandfather and uncle, which serve as evidence of Donald’s shady business deals, tax evasions, investment scams, and failed loan repayments. Her findings detail how her grandfather did whatever was necessary financially to prop up his son’s golden image, both in his own mind and in the eyes of the public.

Painfully, she recounts learning that her father’s family line was cut out of Fred Sr.’s will, with all her aunts and uncles in tacit agreement, because Fred Jr. was the outcast in the family—shaming them, they believed, with his alcoholism, pursuit of interests not sanctioned by his father, and by his premature death from pneumonia, which proved his inherent weakness. As in playing a game of musical chairs, all the children feared being left standing when the music stopped.

The author carefully deconstructs the hyperbolic myths about Donald Trump’s business brilliance and lays it bare for what it is: a house of cards built by bravado, a shell game. Moreover, she proves the case that rather than being a self-made man, he has never succeeded on his own, depending instead on loan after loan from his father, scamming banks, charming backers, manipulating the media, and cunningly taking advantage of U.S. bankruptcy laws.

Still Mary Trump has sympathy for her uncle, “In a way, you can’t really blame Donald . . . Donald was, in essence, still Fred’s construct . . . Donald’s talent for deflecting responsibility while projecting blame onto others came straight from his father’s playbook.”

Learning what makes the president tick is likely to provide readers insight and enlightenment, but little pleasure or satisfaction. Like all of us, he is doing the best he can but, in his position, that is far from good enough for the rest of us. The author insists that he cannot change, so there is no choice but to make change happen to him.