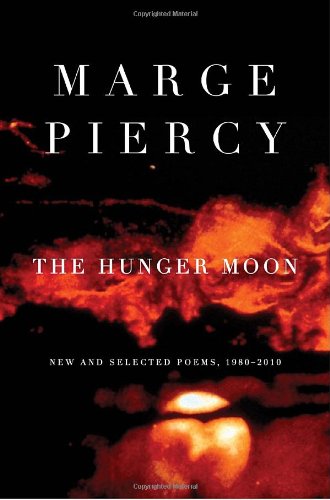 When W. S. Merwin’s term as Poet Laureate of the United States expires this summer I dare Librarian of Congress Billington, and double dare President Obama, to appoint Marge Piercy to the post. I dare them to nominate the author of “For each age, its amulet,” which concludes:

“Best of all is the burning of money ritually
in the pentagon shaped shrine. In Langley
the largest prayer wheel computer recites spells
composed of all words written, spoken, thought
taped and stolen from every person alive.”

As the president defends last year’s finance reform law against a corporate funded hostile House of Representatives let him quote Ms. Piercy’s prescient 1991 poem “Half vulture, half eagle” which anticipated the 2008 housing and home finance collapse:

You feed it and feed it in hopes
it will grow smaller. Does this make
sense? After five years of my writing
checks on the first of every month

it is swollen and red eyed and hungry.
It has passed from owner to owner,
sold by the bank to Ohio and thence
to an ersatz company that buys up slave

mortgages and is accountable to Panama
or perhaps Luxembourg, cannot be
communicated with by less than four lawyers
connected end to end like Christmas

tree light sets and blinking in six
colors simultaneously by fax.
It says, I squat on the foot of your
bed when the medical bills shovel in.

When your income withers like corn
stalks in a Kansas drought, I laugh
with a sound of sand hitting a windshield,
laughter dry as parched kernels from which

all water has been stolen by the sun.
Each month I wring you a little more.
I own a corner of your house, say
the northeast corner the storms hit

when they roar from the blast of the sea
churned into grey sudsy cliffs, and as
the storm bashes the dunes into sand
it washes away, so I carry off

your house any time you fail to feed
me promptly. Your misfortune is my
best gamble. I am the mortgage bird
and my weight is on your back.”

As the Justice Department attempts to protect besieged women’s health clinics, will our cool as a cucumber president put the literary spotlight on Ms. Piercy whose righteous anger is expressed in “For two women shot to death in Brookline, Massachussetts” which begins:

Ms. Piercy is not only a political poet. The Hunger Moon, her second volume of selected poems, a rich selection from the last three decades, also includes: narrative poems about her childhood in Detroit, young adulthood in Manhattan, everyday life with her husband and cats on Cape Cod where they are year round residents, among other subjects on all of which she is a terrific storyteller; nature poems that describe the fauna and flora of the Cape; love poems, some of which attest to the strength, devotion and passion of her current marriage, while others reflect the pain of less healthy previous relationships, pain that still smarts despite her current conjugal happiness; and religious poems that are popular choices for reading out loud at Jewish life cycle events, some of which are reprinted in “additional readings” anthologies meant to supplement non-Orthodox Jewish prayer books.

If Ms. Piercy does not become our poet laureate it may be because she is also a novelist. Instead of earning her living in academia she writes popular historical fiction. I’ve heard widely published prize winning poets praise Ms. Piercy’s poetry to the detriment of her novels. It may be more accurate to simply state that she writes literary poetry and genre fiction.

The poems that appear in The Hunger Moon are not always identical to the poems with the same titles that appeared in her earlier books. For example, “Ashes, ashes, all fall down” as it appears here is an abridged version of the five-section poem of the same title that appears in Stone, Paper, Knife. The final two stanzas of the original section 2 have been dropped and the stanzas that originally constituted section 3 are now part of section 2, section 4 is now section 3, the new version has no section 4, and section 5 is the same. The missing numeral 4 alerts the reader that this is a revised version.

As an accessible poet Ms. Piercy is not formally experimental or innovative, but neither is she formally traditional. Like other contemporary American poets she trusts her ear that traditional English pentameter is not suited to contemporary American speech, favoring trimeter, as in the first two poems quoted in this review, and irregular tetrameter in her narrative poems, such as “Up and out” which begins:

“We occupy neighborhoods like roominghouses.
The Irish lived here; the Italians, then the Jews,
then the Blacks up from the South and now
the Vietnamese fill this dirty decaying motel.
Nobody imagines staying. Success means getting out.”

“The room is a conch shell
and echoing in it, the blood
rushes in the ears,
the surf of desire sliding in
on the warm beach.

The room is the shell of the moon
snail, gorgeous predator
whose shell winds round and round
the color of moonshine
on your pumping back.

The bed is a slipper shell
on which we rock, opaline
and pearled with light sweat,
two great deep currents
colliding into white water.

The clamshell opens.
The oyster is eaten.
The squid shoots its white ink.
Now there is nothing but warm
Salt puddles on the flats.”

In “Always unsuitable” Ms. Piercy addresses the potential mothers-in-law who rejected her before their sons did, women who found her too voluptuous and sensual:

“I look a stuffed turkey in a suit. Breasts
too big for the silhouette. She knew
at once that we had sex, lots of it

on my neck. I could never charm
the mothers, although the fathers ogled
me. I was exactly what mothers had warned

their sons against. I was quicksand.
I was trouble in the afternoon. I was
the alley cat you don’t bring home.”

The brides such mothers wanted for their sons were

“cool, well behaved and impervious
to desire and weather alike. Mostly
that’s who they married and left.

Oh, mamas, I would have been your friend.
I would have cooked for you and held you.
I might have rattled the windows

of your sorry marriages, but I would
have loved you better than you know
how to love yourselves, bitter sisters.”

“Always unsuitable” begs the questions why did a free spirit such as Ms. Piercy date men from such straight laced families, on what basis does she make assumptions about other women’s libidos and marriages, and is it possible that all these mature women discerned in the younger Ms. Piercy a character or personality flaw that she still lacks the self-knowledge to recognize? There is also a sour grapes aspect to “I have always been poor at flirting” which concludes:

“Attraction to me is a walking toward,
the doors in the hands and the mind slowly
swinging on their hinges so that something
can pass over and something new enter.
This flicking of the body like a cape before
a bull, this mincing of the hook under
the feathers is more war and less love than I need.”

Fair enough, but would Ms. Piercy still feel that way if she had a talent for flirting? Raising these questions need not diminish the pleasure readers take in these well crafted, engaging, and thought provoking poems.

Ms. Piercy’s Jewish poems are among her most moving. “Growing up haunted” describes an adolescence in the shadows of both the cold war’s threat of nuclear annihilation, and the recent memory of the Holocaust’s actual mass murder plus survivor’s guilt:

“Fear was the underside of every leaf
we turned, the knowledge that our
cousins, our other selves, had been
starved or butchered to ghosts.
The question every smoggy morning
presented like a covered dish:
why are you living and all those
mirror selves, sisters, gone
into smoke like stolen cigarettes.”

“Amidah: on our feet we speak to you,” a stunning example of her liturgical verse, is too long to quote in full. In the middle section, to the 18 blessings in the weekday Amidah prayer, Ms. Piercy adds:

“Bless the quiet of sleep
easing over the ravaged body, that quiets
the troubled waters of the mind to a pool
in which shines the placid broad face of the moon.

Bless the teaching of how to open
in love so all the doors and windows of the body
swing wide on their rusty hinges
and we give ourselves with both hands.

Bless what stirs in us compassion
for the hunger of the chickadee in the storm
starving for seeds we can carry out,
the wounded cat wailing in the alley,

that shows us our face in a stranger,
that teaches us what we clutch shrivels
but what we give goes off in the world
carrying bread to people not yet born.

Bless the gift of memory
that breaks unbidden, released
from a flower or a cup of tea
so the dead move like rain through the room.

Bless what forces us to invent
goodness every morning and what never frees
us from the cost of knowledge, which is
to act on what we know again and again.”

Ms. Piercy’s metaphor of physical love as a house with open windows and doors is a recurring motif in her poems.

“The head of the year,” which is the literal meaning of the Hebrew Rosh Hashanah, is a fine example of Ms. Piercy’s holy day verse that describes the practice and transformative power of that day of awe:

“The moon is dark tonight, a new
moon for a new year. It is
hollow and hungers to be full.
It is the black zero of the beginning.

Now you must void yourself
of injuries, insults, incursions.
Go with empty hands to those
you have hurt and make amends.

It is not too late. It is early
and about to grow. Now
is the time to do what you
know you must and have feared

to begin. Your face is dark
too as you turn inward to face
yourself, the hidden twin
of all you must grow to be.

Forgive the dead year. Forgive
yourself. What will be wants
to push through your fingers.
The light you seek hides

in your belly. The light you
crave longs to stream from
your eyes. You are the moon
that will wax in new goodness.”

Many of Ms. Piercy’s Jewish themed poems are found in her 1999 book The Art of Blessing the Day, but that book does not include Jewish poems she has written in this century such as “Birthday of the world,” “N’eilah,” “In the sukkah,” “The full moon of Nisan,” and “The Cup of Eliyahu,” all of which are found in The Hunger Moon, a book that deserves a place on the bookshelves and/or e-readers of all educated blue state poetry readers.