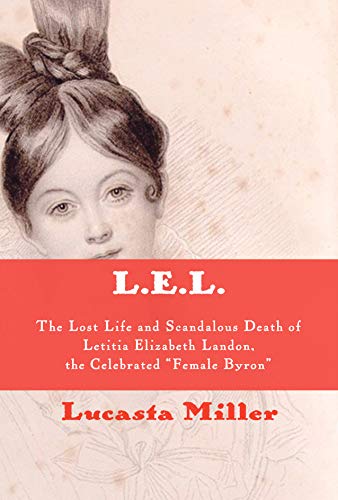 “Seen against the complex backdrop of her family circumstances, the machinations of literary London, and changing social mores that made a ‘female Byron’ no longer socially acceptable, L.E.L., in death as in life, continues to intrigue and bewilder.”

It is a fair assumption that few people, other than students of English literature of the first half of the 19th century—(described by Lucasta Miller as a liminal period between the romanticism of Byron, Keats and Shelley, and Victorian writers such as Dickens, Edward Bulwer and Disraeli)—will have heard of Letitia Elizabeth Landon or her pen-name “L.E.L.” But during her short life, 1802–1838, she was celebrated as “Female Byron” particularly for her apparently innocent verse with its sexual sub-text; “pastoral-erotic” was one of her popular modes. Her poems, novels, and reviews were translated into French and German; and several well-known artists painted her portrait. Though she was considered by many to be "plain and dumpy" she had the capacity and charisma to bewitch all but the most sceptical.

In 1838 she was found dead from an overdose of prussic acid—accidental or otherwise—in Cape Coast Castle in modern Ghana. She died as Mrs. Maclean, the new wife of the governor, whom she had inveigled into marriage in the hopes of restoring her lost reputation in society. Her husband Governor George Maclean found out rather too late that she was “damaged goods,” by which time she had possibly gathered enough information as to his less than enthusiastic enforcement of the 1833 Abolition of Slavery Act, to ensure his silence as to her own antecedents—an uncomfortable basis for a marriage as Miller notes. Both Maclean and his common-law wife, Ellen, were cleared of suspicion of involvement in Letitia’s death.

In 1820,when Letitia was 18, her governess sent a poem of hers to their next-door neighbor, the raffish Mr. William Jerdan, the editor of the influential weekly the Literary Gazette, who may already have cast his lustful eye on Letitia, exercising in the garden under her mother’s strict regime to correct her “pudgy physique.” This first radical political poem, “Rome,” Jerdan received, was followed by others of quite a different genre, including a refined ode to “the purity of the Michaelmas daisy;” and by correspondence from Letitia’s socially ambitious mother, Catherine, who was in straitened circumstances after her husband’s bankruptcy and abandonment, though this was not of course mentioned directly. After more months elapsed and with increasingly sexually suggestive poetical messages, the mutual seduction was complete.

Thus began a relationship that made L.E.L.’s name and literary fame; made her a mother of three children, who were immediately fostered, and never seen by their mother again; and led eventually to her social downfall.

Nor did the relationship with William Jerdan bring with it great financial rewards despite L.E.L.’s contributing hundreds of poems and reviews to the Literary Gazette. He seems to have paid her much less than her market value or even taken contributions gratis, and acting as agent for her novels with other publishers, skimmed off a good percentage for himself. Throughout her life, L.E.L seems to have supported financially, at least in part, both her mother and her brother.

Letitia’s overriding theme was thwarted romantic love, bringing with it “masochistic pain and narcissistic self-destruction.” But unlike some other later 19th-century women poets—Emily Dickinson, Emily Bronte, and Christina Rossetti, for example—“who dressed like nuns and shunned society . . . L.E.L. danced until the early hours and favored risqué décolletages in pink satin, scarlet cashmere, or black velvet.” This contradiction between her poetic voice and her society persona both bewildered and fascinated her various audiences until eventually, her time ran out.

In 1826, the Sunday Times of March 5 published an article under the title "Sapphics and Erotics,” revealing that Letitia and Jerdan had been caught by his cleaner in some sort of embrace. Letitia tried with some success to cast a smoke-screen over the facts by attributing the waves of criticism and derision that followed this exposé to professional jealousies; and Jerdan also provided some ambiguous defense, ensuring the while that his priapic profile remained undamaged. Letitia’s marriage to George Maclean, the Governor of Cape Coast Castle in West Africa, vigorously promoted by a variety of political and commercial interests, was to be her escape from “the inconveniences and annoyances of her own position.”

In the aftermath of her death, many of Letitia’s contemporaries and friends tried to paper over the cracks in her life story as an exercise in damage limitation designed to protect themselves, as negligent friends and colleagues, as much as to assure her reputation. By the discovery of new material relating especially to the existence of L.E.L’s children, Miller has been able to piece together very coherently the celebrity, notoriety, fame, and shame of the writer’s story.

While the main focus is on the vibrant and vicious atmosphere of the male-dominated and misogynistic London literary scene, Miller also presents without indulging in pop psychology some fascinating glimpses of the family atmosphere. The Landons practiced on Letitia and her brother Whittington a form of vicarious punishment; when one sibling was naughty the other was locked in the closet. Letitia was punished for being left-handed, and was brought up in an era of academic hot-housing and ruthless competition, a form of parental conspicuous consumption incidentally designed to improve girls’ marriageability.

Throughout her short and brilliant career, Letitia, who was cleverer, more fluent and more prolific than most of her male colleagues and patrons, usually managed to present to them a surface gloss of girlish winsomeness and femininity. When she showed her real strength and opinions of those upon whom her career depended, it usually cost her dearly.

Miller sees L.E.L as the high camp mistress of equivocation whose poems could be read differently by male undergraduates at Cambridge (some of her earliest fans) or the young Bronte sisters in their Yorkshire parsonage, passionately following, though perhaps not always decoding her every word.

Based on the poems presented the jury may be still out as to the quality of L.E.L.'s output though not their quantity; "her oeuvre is so vast that it has yet to be fully catalogued.” Her work was admired by Elizabeth Barrett (Browning), Edgar Allan Poe, and the influential Parisian Revue des Deux Mondes. Other (female) writers, including near-contemporaries such as George Eliot, and a century later Virginia Woolf, disparaged L.E.L. and denied her genius, though apparently still finding her worthy of discussion.

This memorable and fascinating book is far from being just another example of the increasingly common attempts to excavate a female genius stifled by her male partner. Seen against the complex backdrop of her family circumstances, the machinations of literary London, and changing social mores that made a "female Byron" no longer socially acceptable, L.E.L., in death as in life, continues to intrigue and bewilder.