The Firebird: The Elusive Fate of Russian Democracy (Russian and East European Studies) 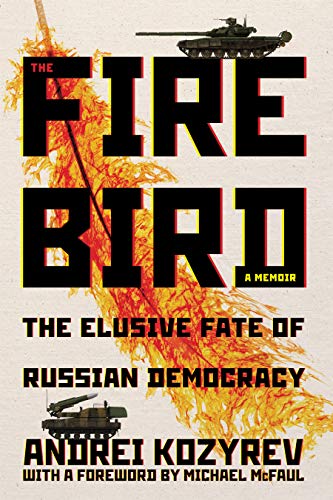 This book is absolutely essential reading for anyone hoping to understand post-Soviet Russia and America’s role in shaping its trajectories at home and on the world stage.

Andrei Kozyrev was foreign minister of the Russian Federation under President Boris Yeltsin from August 1991 to January 1996. His family members were all members of the Communist Party. He, too, joined at age 20. Visiting New York City as a junior member of the Soviet Mission to the United Nations, however, Kozyrev was struck by the comfortable living standards of most Americans, quite contrary to the teachings of the Soviet regime.

But the coup de grace to Kozyrev’s Party loyalty came when he obtained a copy of Dr. Zhivago and read it for some hours in Central Park. Why had it been banned in the USSR? It dawned on Kozyrev: Boris Pasternak’s protagonist had dared to do his own thing, independent of any direction by the Soviet state. Kozyrev did not defect or openly join other dissidents such as Andrei Sakharov, but he looked for ways to reform the USSR from within and push it toward democracy and economic freedom.

In Russian folklore the Firebird [zhar-ptitsa] is a beautiful creature that can bring happiness if caught, despite presenting huge challenges to its captor. Kozyrev says that he has chased his own Firebird, believing that sooner or later the Russian people would discover the road to democracy and cooperative foreign relations.

However, the challenges have been and still are “most painfully evident.” How and why did high hopes for the post-Soviet era wither? This book lays out what happened as Kozyrev saw it. His perceptions parallel those of Michael McFaul, U.S. ambassador to Russia under President Obama, whose book From Cold War to Hot Peace was reviewed here in June 2018, and who provides an incisive foreword to Fire Bird.

Liberal hope mingled with chaos as the star of Russian President Boris Yeltsin rose and that of Soviet President Mikhail Gorbachev dimmed in 1990–1991.  Kozyrev shows how events of great strategic importance can look funny in retrospect.  Yeltsin, like today’s U.S. president, gained supporters by his displays of charisma, but he had no carefully considered plans and often shot from the hip. Late in 1991 he told the parliament of Belarus that he found an ancient document showing the Russian tsar, promising never again to leave Belarus unprotected and ungoverned by the Russian empire. This clumsy demarche killed any prospect of a renewed union, a loose federation of former Soviet republics as equals.

A few days later, Kozyrev, in behalf of Yeltsin, tried to phone U.S. President George H. W. Bush to tell him that the USSR was dead and that Russia, Ukraine, and Belarus would enter the world scene as independent republics. The call was made from a hunting lodge where leaders of the three fledgling states were gathered. Phoning on a Sunday afternoon, Kozyrev told the White House operator that he was calling for Russian President Boris Yeltsin. The operator had heard of Gorbachev but not of Yeltsin. She proposed to phone back, but Kozyrev could not tell her the lodge’s phone number because its housekeeper was gone. Kozyrev waited more than half an hour, but Bush finally got on the line and then talked to Yeltsin. The two had met before and soon were using each other’s first names. Bush wished the new “commonwealth of independent states” (CIS) smooth sailing and said he was glad the new leaders planned to treat Gorbachev well. Except for the three Baltic republics and Georgia, all the other former Soviet “union-republics” soon agreed to join the CIS. (Membership has grown and shrunk over the years.)

All politics is not just “local” but personal. Hard-liners in Moscow opposed Kozyrev’s orientation at the foreign ministry. When Yeltsin spoke at the ministry in late 1992, he repeated an idea he probably picked up at the Foreign Intelligence Service and referred to Kozyrev as “Mr. Da,” because he often said “yes” to Western demands. (The former Soviet foreign minister Andrei Gromyko was often called “Mr. Nyet” because of his intransigence.) Hard-liners in 1992 presented spy chief Evgenii Primakov as a centrist—neither Mr. Da nor Mr. Nyet. Often inconsistent, like Donald Trump, Yeltsin ended his speech by voicing his support for Kozyrev and the ministry.

In 1993 Kozyrev ran for a seat in Russia’s lower house, the Duma, representing Murmansk where he often visited Russian naval forces. Kozyrev was opposed and denounced by Vladimir Zhirinovsky, head of the Liberal Democratic Party noted for its militaristic, nationalistic, and populist rhetoric. Zhirinovsky spouted Primakov’s anti-NATO line, openly contradicting the foreign ministry’s position that NATO no longer threatened Russia. Yeltsin began to waffle, and Kozyrev thought the president no longer honest with him. Kozyrev won the Murmansk seat in the 1993 elections, but Zhirinovsky’s party gained the second-most share of seats in the Duma--14.2 percent.

Democrats in the Russia’s Choice party won 15.6 percent of the vote, but were punished, Kozyrev writes, for failing to put forward a leader other than Yeltsin. Still at the helm of the foreign ministry, Kozyrev feared in late 1993 that the opportunity to radically reform Russia had been missed. A half-reformed Russia would be tortured by its double identity that included the anti-Western complexes and neo-imperialism enshrined in neo-Soviet tendencies.

Kozyrev’s worries deepened in 1994 when U.S. president Bill Clinton told an audience in Prague that NATO would surely expand and when he took credit for persuading Ukraine to return its share of Soviet nuclear weapons to Russia. Clinton (like Yeltsin) teetered back and forth on NATO and other issues when he visited Moscow. Double-speak by both presidents—soft for foreign audience and tough for domestic—bolstered anti-Western suspicions in the Kremlin and confused the Russian public.

Tensions increased when U.S. planes bombed Bosnian Serb artillery units shooting down at  Sarajevo.Kozyrev  and other Russian liberals opposed Serbian brutality but they had expected to be consulted—not ignored—by the West. Clinton informed Yeltsin about the air strikes only after they took place and already reported in the media.

Kozyrev writes that in 1996 Yeltsin replaced him as foreign minister with foreign intelligence chief Primakov to “reverse my ‘pro-Western’ foreign policy.” Kozyrev continued to represent Murmansk in the Duma. He saw Yeltsin as a tired and very wobbly veteran who could no longer lead democratic reforms.

By the mid-1990s, however, newly rich oligarchs were calling the tune. They supported Yeltsin’s reelection, assuming they could manipulate him. When Yeltsin retired in 1999 and handed supreme power to former KGB colonel Vladimir Putin, some oligarchs were surprised and displeased. But declassified records of the Bill-Boris conversations suggest that Clinton accepted this appointment easily. Implicit in Kozyrev’s account, Clinton and his Russian adviser Strobe Talbottt in many cases helped to torpedo the aspirations of Russian liberals for democracy at home and cooperation with the West.

When Kozyrev’s term in the Duma ended in December 1999, he reinvented himself as a businessman. He now operates from Miami, Florida, but has maintained contact with leading Western experts on Russia, among them, former ambassador McFaul. Even if the Firebird is gone or just nesting, one hopes that Kozyrev will continue to share his perceptions on what is happening in what is still by far the world’s largest country.