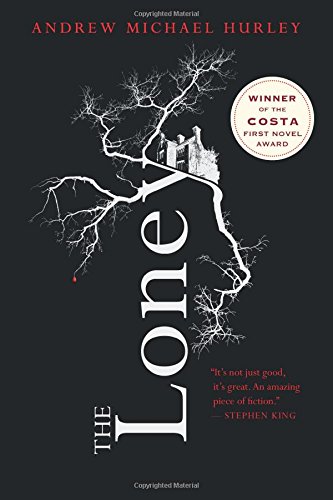 When Andrew Michael Hurley’s debut novel, The Loney, was first published in 2014 by the British publisher Tartarus Press (in a highly-limited 300-copy print run), it quickly turned heads and garnered attention. Shortlisted for the James Herbert Award For Horror Writing, it was later a winner of the Costa First Novel Award, and hailed by Stephen King as “an amazing piece of fiction.” The Loney was saved from collectors-only limbo by its acquisition by John Murray with a 2015 printing in the U.K., and is now available in the U.S.

With its wider release, it stands a chance at the reception it has deserved, with one catch: despite the genre-heavy associations being tossed around in nearly every marketing blurb and review description, it should be considered something very different from a horror novel.

The Loney is the narrative of a man known only as Smith as he recounts a religious pilgrimage from his youth in which his family’s parish took him and his disabled brother Andrew (or “Hanny”) to an isolated Lancashire inlet known as the Loney. There, they hope to find the power of God to help heal Hanny; but soon they begin to uncover a number of disquieting secrets among the locals—and each other.

Although told with a slow-burn style that fits right in with such masters of disquiet as Shirley Jackson, Robert Aickman, and Ramsey Campbell, The Loney does not lead the reader not through a labyrinth of escalating terrors. Rather, this is a melancholic coming-of-age tale set against the claustrophobic backdrop of a religious group living in a cold and isolated region.

The house that the parish moves into is full of its former owner’s taxidermy animals and an “. . . uneasy feeling . . . that the taxidermist had merely stepped out to smoke one of his expensive cigars and that he might return at any moment and pop through a door like one of the three bears . . . to find a Goldilocks sleeping in every room.” The rocky shore is known for drowning many a poor soul. And nearby is a small island, Coldbarrow, upon which lurks a sprawling, decaying building full of rumor and shadow known as Thessaly.

One of the strongest aspects of the book is Hurley’s deeply evocative (but not overly-descriptive) prose, which is so atmospheric that the titular location’s gray, humid, and bitter air seems to palpably permeate every page.

Some of the specific locations, proverbs, and dialect can at times be a bit puzzling to readers unfamiliar with the area, and there may be some confusion between the characters of the narrator’s father, Father, and Father Bernard (and his predecessor, Father Wilfred). However, none of these distractions ever truly hamper the experience—rather, they only serve to further steep the reader into the atmospheric narrative.

The narrator and Hanny are the emotional anchors of this story. Hanny’s silent, awkward pleas for fun and affection are downright heartbreaking, and the narrator’s sense of brotherly responsibility is deeply involving. From the religious dogma of the parish to some unsavory and suspicious locals, the brothers are faced with a number of painful and morose encounters throughout this moody tale.

A most impressive and haunting debut deserving of its high praise, The Loney is a memorable tale of curiosity, fear, faith, and sorrow. With appropriately dreamlike lucidity, Andrew Michael Hurley delicately peels back layers of secrets and beliefs to reveal a twisted heart of darkness that is sure to leave the reader with a shiver.