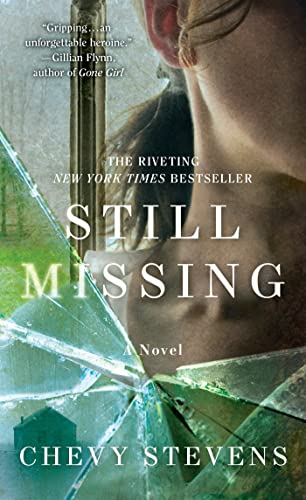 Still Missing is Chevy Stevens’s debut novel—it is that good. Stevens writes as if she has been doing it for years. Her words propelled this reviewer through the book—the action and suspense at times lead to anxiety, while the heart-wrenching sorrow caused tears. Thrillers are like roller coasters, taking the reader up that long, terror-inducing climb and then sending you plummeting uncontrollably down the face of a steep cliff.

In Still Missing, Stevens writes in the first-person point of view. This difficult approach, particularly for a first-time novelist, allows the reader to get into the head of the protagonist. Done correctly, it allows the reader to feel everything the character is feeling. In Still Missing, Stevens does a marvelous job of allowing her readers to see, hear, smell, and feel the sheer terror that the main character, Annie O’Sullivan, must endure.

O’Sullivan is a realtor abducted at an open house she is hosting at one of her properties. This is not only a believable premise, but also one that has occurred. It highlights the vulnerability of female realtors to deranged individuals bent on evil. Stevens does an excellent job of not only demonstrating this fact, but also sharing with the reader the destruction of the victim’s psyche after the event occurs.

Another writing technique the author demonstrates is having her protagonist recount her tale of terror to her psychiatrist, also in the first person. Throughout the book this duality exists: the abduction and its aftermath, as well as the sessions with the doctor. The two stories run in tandem, and the overall effect is successful. It is interesting that while describing the appointments with her doctor, Stevens never really describes the doctor in much detail. The most we learn is that the psychiatrist is an older female who dresses well—yet the brevity and lack of information works.

While this could have been a book with few characters other than the protagonist and antagonist, Stevens nevertheless invented a few interesting ones. The bad guy is referred to as “The Freak.” She paints a comprehensive picture of him as the book progresses, and in describing one of the cops handling her case she writes: “He looked solid. Calm. If this guy had been on the Titanic, he’d have finished his coffee.” Great writing.

One drawback for this reviewer was the attempt to make the protagonist appear tough by using profanity. This was a little overdone. Annie’s character would be better served with an occasional expletive—we already understand that’s she’s a strong woman based on her pain and tolerance levels.

The book contains some surprising twists and turns, the ending coming out of left field—totally unexpected. It was a pleasure to read. Still Missing is one of those books delivering feelings of both relief as well as sadness that it must end. It is a well-written, fast-paced, emotion-grabbing read. This one should win some awards.