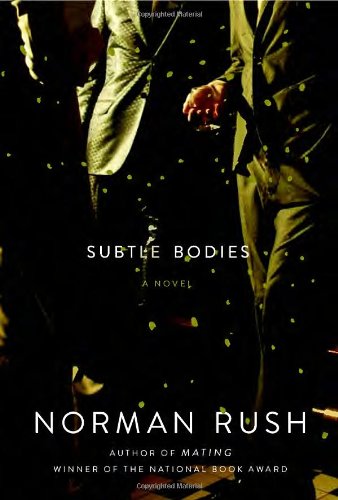 Imagine a remake of the movie The Big Chill in which instead of a cast of thirtysomethings the characters are middle-aged college friends who have gathered after a quarter century for the funeral of one of the group, and you have the basic plot outline of Norman Rush’s third novel Subtle Bodies—but the resemblance ends there.

Told in the third person from the alternating perspectives of one married couple, Ned and Nina, the novel compares and contrasts their intense and happy marriage with Ned’s waning friendships with his former classmates.

Mr. Rush has said his first novel Mating (which won the National Book Award) is about courtship; his second, Mortals, is about marriage; and Subtle Bodies is about friendship. If so, the new novel appears to take the view that friendship between spouses is superior to the platonic variety.

Ned is 48 and Nina is 37; they live in Berkeley, CA, have been married three years, and are trying to conceive a child. But just when she is about to ovulate Ned flies east to attend the funeral of his college friend Douglas at the latter’s Catskills mountaintop estate where the three other members of their all-male college clique have already gathered.

Nina catches the next flight to New York to pursue Ned so as not to lose the opportunity to mate, which gives Ned a day or so to reacquaint himself with his old friends before Nina arrives.

As undergraduates at NYU in the mid-1970s Douglas was the leader of a circle of friends/acolytes who in addition to Ned included David, Joris, and Elliot. The four emulated Douglas’ intellectual tastes and habits, which led them both to the dean’s list and to following Douglas to screenings of foreign films and walking out on the ones that didn’t meet his standards.

A quarter century later Elliot, a single lawyer turned stockbroker, is helping Douglas’ Czech widow Iva plan the funeral and is largely absent and aloof toward the others. David is married but came alone and owns a company that produces PSA videos. Joris, a divorced lawyer with two grown sons, keeps his married-women fetish in check by frequenting an upscale brothel.

Douglas inherited a fortune and devoted himself to social science scholarship for which he enjoyed an international reputation. His and Iva’s son Hume is a brilliant but troubled teenager.

Ned earned a masters degree, worked in food co-ops, Fair Trade, and in the autumn/winter of 2002–03 is helping to organize The Convergence, simultaneous demonstrations in cities around the world against the impending invasion of Iraq (for a Parisian view of those demonstrations see Russ Rymer’s Paris Twilight, also reviewed on NYJB).

Nina, a CPA who only completed two years of college, is every bit Ned’s intellectual equal, and unlike him speaks several languages fluently. She regards spousal friendship as the conjugal equivalent of attachment parenting.

“. . . she wanted to be his best friend. And she had criticisms of his old milieu of friends, and resentments about them. All his life he had wanted a strong and present friend. His only sibling, his older brother, had been abducted into piety, absence, the Salesian House of Studies, priesthood. They had never been friends. Nina understood it all and wanted to undo it, be his total friend, which he understood because of course she was.”

Nina believed “She had a better idea of what he was doing than he did. He wasn’t depressed but he wasn’t happy enough. The fucking truth was that Ned was in fact an instrument for good, both in Fair Trade and before, in the co-operative movement . . . what was left of it. But he could be more of a force! He was a skeptic on the subject of himself. It held him back. It was painful to her. She shook the thought away.”

Of the two protagonists Nina is wiser, wittier, and her insightful pragmatism complements Ned’s earnest idealism. She is also a fun and playful bedmate. Yet it is his backstory that gives the novel depth and makes him her reclamation project.

“Subtle bodies” is a phrase coined by Nina’s mother for the auras that surround people revealing their true natures. Thus the title is somewhat misleading—though Nina is a sexy character.

The first two thirds of this novel is a really fun read. Then as the friends compose their eulogies while waiting for the day of the funeral the pace slows somewhat, though both financial and sexual scandals as well as clandestine international transactions add elements of intrigue.

Subtle Bodies is half the length of Mating and a third that of Mortals. Its prose is less dense, and its erudition less intimidating. Unlike its predecessors it is set in America instead of Botswana. It’s an enjoyable read on its own terms, and like William Gass’ Middle C (also reviewed on NYJB) it can introduce readers to some of the themes in its author’s longer novels.