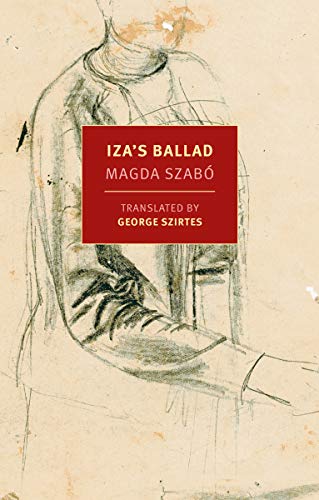 As the rare “lady doctor” at a small town clinic in Communist Hungary in 1960 and an ardent partisan who helped her father smuggle anti-Nazi pamphlets during World War Two, when she was a student, Iza Szocs had to be tough.

“How exhausted she must be,” one admiring nurse says of Iza, “with that constant self-discipline, that need to save not only her family but the whole world.”

The novel Iza’s Ballad, too, presents a tough exterior. To get a full sense of the tumultuous interrelationships among Iza’s mother, father, fiancé, ex-husband, housekeeper, and other people in her life, the reader has to push through some beautiful but dense writing. For many readers, the effort may be too hard.

Iza’s unemotional efficiency is her defining feature from the very start of the book, when her elderly father, Vince, dies of cancer. As a respected local judge, Vince had been fired decades earlier for refusing to give in to political pressure regarding a verdict. He and his wife, Ettie—a peasant with far less sophistication or education—lived in poverty until he was officially rehabilitated 23 years later. They had a son who died as a toddler.

So Iza, born when her mother was 39, was a precious, beloved miracle to her parents. And her mother is thrilled that Iza promptly announces after Vince’s funeral that the mother is to come live with Iza in Budapest, rather than remain in the shabby old house she had shared with Vince for 20 years.

“Now,” Iza declares, as she packs her mother off to the local spa for a week’s rest, “you’ve shed enough tears. If you went back to the house now you’d only go round and round the rooms and get yourself worked up again. I’ll arrange everything here and once I’ve finished I’ll follow you.”

“Iza was always right,” the mother reflects, at another point. “That was the strange thing about her: she had been right about everything, ever since she was born.”

Clearly, mother and daughter are in for some rough surprises in Budapest.

Some of those surprises are funny, as when the mother tries to brew coffee over a smelly paraffin flame in Iza’s modern apartment. But most are painful, a clash among well-meaning people—also including Iza’s housekeeper, Terez, and her fiancé, a writer named Domokos—from vastly incompatible cultures.

The big problem is author Magda Szabo’s writing style—presumably her own style, not significantly altered by the translator, George Szirtes.

Szabo insists on calling the mother “the old woman” or “she.” The name Ettie is used no more than five times in the entire book.

This turns the mother into more of a stock character rather than a full-fledged person. Moreover, the pronoun overuse leads to many awkward paragraphs when the mother is interacting with Iza, Terez, the nurse Lidia, the neighbor Gica, or almost any other female character. For instance:

“Iza didn’t say anything. She could have picked up something very like this once she got there, but there was no use arguing with her when she was determined not to understand that she might not find a porter on her arrival.”

So when does “she” refer to Iza and when to her mother?

More happily, in plot and character development, Szabo is masterful at slow, subtle revelations, such as Vince’s political backstory.

However, the motivations of the two men in Iza’s romantic life—Domokos and her ex-husband Antal—are never really clear.

In an age of too many easy “summer reads,” it’s probably good for literature to have a tough nut like Iza’s Ballad.