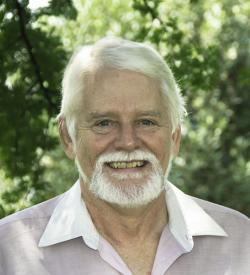 Michael Sears writes with Stanley Trollip under the name Michael Stanley. Their series featuring Detective Kubu is set in Botswana, a fascinating country with magnificent conservation areas and varied peoples. They know the country well, having visited frequently and been involved there professionally.

The mysteries are set against current southern Africa issues: the plight of the Bushman peoples of the Kalahari (Death of the Mantis, shortlisted for Edgar and Anthony awards, won a Barry award in 2011), the pervasive power of witch doctors (Deadly Harvest, shortlisted for an ITW Thriller award in 2014), the civil war in Zimbabwe, blood diamonds, the growing Chinese influence in Africa, and biopiracy.

Their first novel, A Carrion Death, was published in 2008. Their most recent book is Facets of Death (Poisoned Pen Press, 2020), the latest novel in the writing team's award winning Detective Kubu series set in Botswana. Their thriller, Shoot the Bastards (Poisoned Pen Press, 2019), featuring journalist Crystal Nguyen, addresses the vicious rhino poaching and horn smuggling mafias. They have also contributed short stories to a variety of anthologies and mystery magazines.

Mr. Sears has lived in South Africa, Kenya, Australia, and the U.S. His background is in mathematics, and he now specializes in image processing. He has worked in academia and industry, and is currently a professor in the School of Computer Science and Applied Mathematics at the University of the Witwatersrand in Johannesburg.

A Death in the Family: A Detective Kubu Mystery

A Death in the Family: A Detective Kubu Mystery

Once Upon a Crime: An Anthology of Murder, Mayhem and Suspense

The Lioness: A Novel

“The marriage of 1960s Hollywood and wild Africa generates a fascinating historical thriller.”

Even the Darkest Night: A Terra Alta Novel

“Cercas has molded this police procedural into a fine literary novel.”

Dust Off the Bones: A Novel

“Dust Off the Bones is a powerful historical thriller, vividly picturing the era as it focuses on a period of local history . . .”

“a disturbing and thoughtful novel, almost surreal at times. . . .

The Survivors: A Novel

“This is both a clever mystery with a satisfying ending as well as a tense thriller driven by people, not by neat contrivances. Jane Harper has pulled off another stunner.”

“Animals is not light reading, but the writing is strong and the characters and story believable.”

The Ghost Moths: A Novel

“The Ghost Moths is an adventure story set in a fascinating part of the world by an author who knows it well. The metaphysical flavor adds to the intrigue.”

The story is narrated by Khalil, a young man from Morocco whose family has settled in Belgium where he grew up.

This is the latest in Akashic Books city noir series set in Africa. The 13 stories visit various locations in Accra, all of which show the poverty but hope of the people who survive there.

“Mengiste and Akashic have done us a service by putting together this intriguing collection.”

“enjoy the complex characters drawn with beautiful prose and flashes of humor . . .”

The Society of Reluctant Dreamers

“this unusual and moving story has a dreamlike quality of its own.”

“Bitter Pill has a strong plot that keeps the pages turning, but it’s the insightful studies of evil—Carlos, Lynch, and Chester—that make the book memorable.”

“Weaving two apparently independent stories together, keeping the tension ramping in both, and bringing them to a simultaneous climax, is a challenging undertaking.

The Body Outside the Kremlin: A Novel

James L. May has written a remarkable debut novel that brings to life one of the worst periods of soviet history.

We, the Survivors: A Novel

“Lotz has written a thoughtful thriller that is as much about the psychology of people who hide in various ways than about catching a murderer.”

The “memo” of the title is a recording that Warrant Officer Radebe Turner makes when he’s being hunted down in the Northern Cape.

“Church’s characters are strong and believable, and the plot keeps the pages turning.”

The Accident on the A35: An Inspector Gorski Investigation

This is the second of Graeme Macrae Burnet’s crime novels featuring Chief Inspector Georges Gorski, the shy chief of police of the sleepy rural village of Saint-Louis in Alsace in France.

Stephen Holgate has written a fascinating and well-constructed thriller set in Madagascar.

With his debut novel, No Ordinary Killing, Jeff Dawson has given us a fascinating look at the South Africa of the beginning of the 20th century at the same time as crafting an intriguing m

To say that this novel is set in Lagos is to miss the point—the book is a memoir of Lagos. If Abel Dike is the protagonist, then Lagos is the eponymous antagonist.