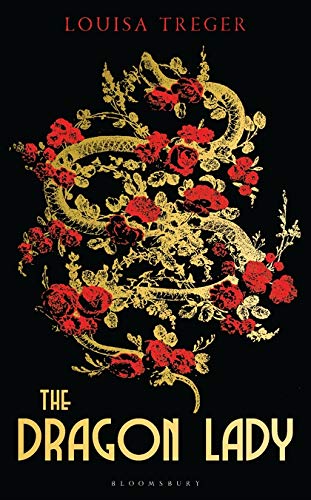 The Dragon Lady is based on the life of Lady Virginia (Ginie) Courtauld. Although some documentation about Virginia exists, it’s not extensive. In Italy she fell in love with Count Paulo Spinola, but their marriage was not a happy one. After it ended, she returned to England and married Stephen Courtauld, the wealthy son of a textile merchant. Together, they rebuilt Eltham Palace near London, and in the early fifties they moved to Southern Rhodesia (modern day Zimbabwe).

Louisa Treger had access to some of her personal correspondence and used this to help her find a genuine voice for Ginie. Taking a real life that is little known and turning it into a convincing novel is a challenging undertaking, but whether or not it is the “real” Virginia Courtauld, Treger has constructed a memorable and complex character, and built an intriguing story around the facts of her life.

The book opens with Catherine, who was a child when the Courtaulds lived in Rhodesia, looking back and recalling Ginie being shot in the gardens of their property. Catherine’s parents were neighbors of the Courtaulds, and her father was unquestionably attracted to Ginie. Left on her own, Catherine witnesses the shooting and Ginie being rushed to hospital. The shooting is the centerpiece of the mystery, but the story is really about what led up to that moment.

Ginie is unconventional and a free spirit, yet she craves recognition and acceptance from the English upper class. Her unconventionality—to say nothing of the snake tattoo that winds up her leg—is strongly in conflict with that aspiration. The highpoint of her social climb in England is a successful visit from King Edward VIII and Wallis Simpson to the whimsical art deco Eltham Palace.

But when George VI’s wife, Elizabeth, visits some time later, she is dismissive. Ginie overhears her saying to one of her ladies, “It’s exactly like a film set. I thought they were staging a production of some sort.” However, she mellows. Later, as the Queen Mother, she makes a state visit to Rhodesia, knights Stephen, and is kind to Ginie. There are a number of occasions like this where Treger introduces real people into the story in a seamless way.

After the Second World War, when Eltham is badly damaged and Ginie is no longer happy in England, she and Stephen move to Southern Rhodesia and buy La Rochelle, a French-style chateau near Umtali. While one might think that the English colonials would be pleased to have such sophisticated neighbors, nothing could be further from the truth. Jealous of their wealth, and disapproving of their sympathy with the black workers, the neighbors generally rebuff them and treat Ginie as a source of gossip. And deeper tensions develop.

It’s at Le Rochelle that Ginie is given the nickname of “Dragon Lady” by her black workers in awe of her tattoo. The Courtaulds’ efforts to help the local people include building a school for the children and later building an agricultural training college. None of this is appreciated by the local whites who think it will just give the blacks ideas above their station.

Stephen even meets with a group of liberation struggle leaders, including Robert Mugabe, but he keeps them at arm’s length. “Look,” he informs them, “I should tell you that I don’t get involved in African politics, so I’m not sure how qualified I am, but I’m happy to help in any way I can. My line is humanitarian.” This rings true with what is known about the Courtaulds’ time in Rhodesia. Apart from the schools, they endowed a theater and the National Art Gallery. If they had truly supported the liberation struggle, there would have been no knighthood.

It’s Catherine who links the pieces of the mystery with her first-person account, and it’s also left to her to reveal the way things really are between the races. A lonely child, her only friend is a black boy who has aspirations, but no hope of achieving them. After an outburst directed at white people, he apologizes. “I’m sorry. Sometimes, I don’t want to see another white person every again. Not even you. And it makes me feel bad inside.” Catherine says she understands, but she does not. Shortly after, she’s forbidden to see him again, and she obeys.

The Dragon Lady powerfully captures the colonial era in Zimbabwe through the eyes of Ginie, Stephen, and Catherine. Lovers of historical fiction won’t be disappointed.