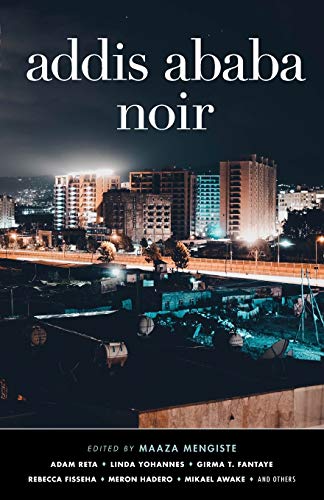 “Mengiste and Akashic have done us a service by putting together this intriguing collection.”

Akashic Books has been focusing on Africa recently in their Akashic Noir series, and they have produced some enthralling collections. Addis Ababa Noir is no exception. The editor, Maaza Mengiste, is excellent, and an exceptional novelist in her own right. Her latest book The Shadow King is currently shortlisted for the Booker Prize. She’s confessed that she worked harder and longer on this collection than she’d expected, and the result gives testimony to that as well as to the quality of the diverse writers.

In her introduction, Mengiste illustrates the spread of the stories against the sweeping history of Ethiopia that goes back to biblical times. She left Ethiopia as a young child—her parents fled the revolution to settle in the US. Writing of her earliest memories, she says, “I measured days by the nights that fell on us and brought in darker things: revolution and soldiers and curfews and gunfire. Somewhere in between this, the hyenas started coming to eat our dogs.” These sorts of memories lead to the backdrop for several of the stories, although they also have a contemporary twist.

Mengiste sums it up this way:

“What marks life in Addis Ababa, still, are those starkly different realities coexisting in one place. It’s a growing city taking shape beneath the fraught weight of history, myth, and memory. It’s a heady mix. It can also be disorientating, and it is in this space that the stories of Addis Ababa Noir reside.”

The collection is divided into four sections, loosely based on the themes of the stories. The first section, Past Hauntings, contains some stunners. Mengiste’s own story, “Of Dust and Ash,” revolves around a forensic team from Argentina coming to Ethiopia to collect evidence for the trials of the perpetrators of the red terror that followed the revolution. The forensic team is based on fact, as is the team’s photographer, who was held in Argentina during their own terror and forced to photograph the prisoners on their way to their varied deaths. Mengiste asks what it does to people to exhume skeletons buried in unmarked graves under the eyes of grieving relatives who will never know the answers they seek.

“Alfonso opened his lens wide to take in the dry cracked earth. He saw two Ethiopian men watching him intently from a short distance. Each of them held a photograph to their chest, the image facing his direction. Alfonso felt his stomach tighten. He knew the ritual, recognized the hopes they were trying to place in his hands. He’d seen this same gesture in Argentina.”

It’s a story that one broods about for a long time afterward.

“Ostrich” by Rebecca Fisseha, who was Quill & Quire magazine’s breakout debut author last year, also reaches back into the past. A young girl experiences the growing violence and turmoil as her mother takes her past the palace. She is terrified of the ostriches, but one day her fear is forgotten when she sees a dead body lying at the edge of the road. That haunts her, and when she returns as an adult many years later, the ostriches are gone but the ghost remains in her mind, leading to a painful conclusion.

Then there’s Meron Hadero’s “Kind Stranger,” the tale of a love lost and destroyed. An old man confesses his past to a kind stranger.

The second section, Translations of Grief, starts with Mikael Awake’s memorable “Father Bread.” This story builds folklore into the life of a young boy orphaned by a horrible attack and taken in by a kindly man who gives bread to the homeless children. But menace builds throughout, and when it strikes, it strikes hard.

Mahtem Shiferraw has a striking piece, “The Blue Shadow,” around a protagonist who paints her emotions in colors on her surroundings. As a visual artist as well as a writer, Shiferraw brings it off with this tale of betrayal. Here’s the opening:

“When she spoke, the room filled with yellow. Her tone could paint the whole house at one stroke, walls suddenly blooming with perennials and adey abeba, floors caked in branches of tsid, and corners sprouting with the blue of kiremt rain. The air would become thick and creamy . . .”

“A Night in Bela Sefer” revolves around infatuation and sex. That’s clear from the first paragraph, but it’s nothing like what we expect, and it doesn’t end well. Sulaiman Addonia, an acclaimed novelist collecting prize nominations, has a wry smile at our expense here.

In the third part, Madness Descends, the authors start to explore noir concepts that may be generated by the protagonists’ minds. Or maybe not. Lelissa Girma’s character has the ultimate insomnia. He never sleeps. The story reveals why, and where it inevitably leads.

Girma Fantaye’s “Of the Poet and the Café” explores the case of a man who believes the world has changed overnight—a small change that removes the café where he made and lost his reputation as a poet. Painfully, he discovers that the small physical change parallels the emotional one.

“Of Buns and Howls” by Adam Reta follows the travels of a traditional bun from Ethiopia to South Africa, dragging the characters along with it. It can’t be described. You have to read it.

The final part, Police and Thieves, promises to be more traditional. The first story, “Kebele ID,” by Linda Yohannes is about as close as it gets. Money is stolen. Then stolen again. Its owner and the police want it back. But there’s a twist in the tail.

“None of Your Business” by Solomon Hailemariam is about why it’s not just the thieves who fear the police, and the final story “Agony of the Congested Heart” by Taferi Tafa revolves around ideals gained and then painfully lost.

These and the rest of the 14 stories in the collection give one a snapshot of Ethiopian writers, new and established, and of what they can do. It makes one scramble for more of their work. Mengiste and Akashic have done us a service by putting together this intriguing collection.