The Society of Reluctant Dreamers 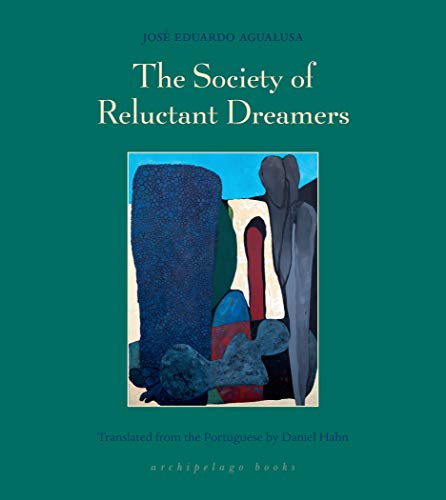 “this unusual and moving story has a dreamlike quality of its own.”

One of the attractions of this remarkable novel is that it gives insight into Portuguese-speaking Africa, which is often obscure to the English-speaking world. Attractive prose illuminates a picture of Angola over many years. Outside Angola, there’s a brief episode in South Africa, but Brazil is where the protagonist pursues not only his own dream but dreams in general.

After a painful divorce, Daniel Benchimol goes to spend a night at the Rainbow Hotel, a collection of multicolored bungalows owned by the enigmatic Hossi Kaley. The next morning while swimming Daniel finds a waterproof camera, and when he downloads the pictures he discovers images of a woman—he calls her the Cotton-Candy-Hair-Woman—who has often featured in his dreams. The night before his divorce he dreamed about her, and she warned him, “Everything passes, my friend. Time covers the world in rust. Everything that shines, everything that is light, will soon be ash and nothing.”

Then Daniel dreams of Hossi, who is concerned but not surprised. He was a soldier for UNITA in the Angolan civil war, and he tells Daniel of his capture by Cuban soldiers, and how in Cuba people nearby dreamed of him wearing a purple, silk cloak. People are scared, accusing him of witchcraft.

On the other hand, Cuban Intelligence looks to weaponize this, but eventually abandons the project as hopeless. Of the war itself, he talks not of the fighting, but of strange experiences, and dreams of the dead, sometimes people he’d killed. In one a South African soldier who died after stepping on a land mine, tells him: “Oh mate, mate, we’re killing with no reason at all, the people now sending us to our deaths are already getting ready to switch sides.”

Daniel becomes fixated on the Cotton-Candy-Hair-Woman and discovers that her name is Moira Fernandes and that, originally from Mozambique, she now lives in Cape Town. They communicate, and she tells him her artworks are based on dreams. We begin to see the drift of things when he discusses her with Hossi and asks if he knows the meaning of the word shaman: “Shamans practice their dreaming. They use their dreams to understand the world. The word ‘shaman’ . . . means he who sees in the darkness.” Hossi encourages him to travel to Cape Town to meet her. He falls in love with her, but it’s only consummated in a dream. On a hike together on Table Mountain, they meet Hélio from the Dream Lab in Brazil, where they’ve developed a technology that produces images of people’s dreams.

When he returns to Luanda, he discovers that his daughter has been arrested and jailed for protesting by throwing blood-stained money at a function where the dictator was to speak. It torments Daniel that he can do nothing for her. Nonetheless, he travels to Brazil to join Moira and Hélio with his dream machine, which she is now using for her art. They become lovers just as he’d dreamed. However, Hossi lets him know that his daughter and the six others arrested with her are now on a hunger strike. He hopes Daniel will dissuade them, but he has a backup plan also. “Pacifism, my dear brother is like a mermaid: it can only breathe in the sea of fantasy, reality doesn’t suit it. Let alone this reality of ours today, which is so very cruel.”

After that, Daniel is inexorably sucked into politics. The struggle is eventually resolved in a peculiar way that is, however, consistent with the philosophy of the novel.

Daniel is told at one point: “To anybody with any imagination, the past is constantly changing. You think the present is born out of the past, but it’s the other way around.”

Since Daniel sometimes dreams the future, it seems that the future can change the present as well. At times this unusual and moving story has a dreamlike quality of its own.