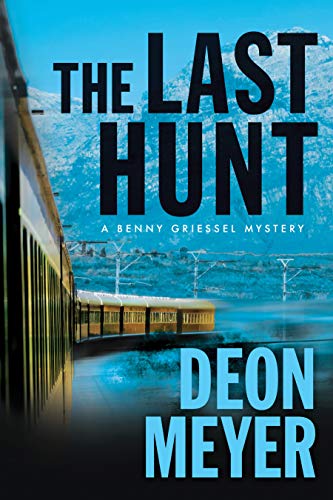 “Weaving two apparently independent stories together, keeping the tension ramping in both, and bringing them to a simultaneous climax, is a challenging undertaking. Meyer pulls it off seemingly effortlessly. He’s that good.”

Why choose between a murder mystery and a thriller when you can have both? The Last Hunt, Deon Meyer’s new Benny Griessel novel, is actually two books in one. It’s a tense assassination thriller set in France, and it’s an intriguing police procedural set in South Africa. Although the two stories develop independently, both are different aspects of the same plot and they come together at the end in an unexpected and satisfying way.

The background is South African politics in the period before President Ramaposa took over in 2018. A kleptocracy, under the able leadership of the then president, was ripping off every public coffer it could lay its hands on, and working on the ones that it couldn’t. Three Indian “gentlemen” were facilitating this with liberal doses of cash in exchange for sweetheart deals. More and more organs of the state were “captured.” Vladimir Putin lurked in the background.

In Meyer’s story, a group of now elderly stalwarts of the struggle against the apartheid regime, aghast at the corruption and the destruction of Mandela’s vision for the country, set out to assassinate the president and bring down his cronies. To do so, they recruit a man from the struggle days who used to be a specialist. He currently lives in Bordeaux under the false name of Daniel Darret, happy to be working in a furniture repair business. He initially rejects the assignment, but he changes his mind when the old comrade who approached him is murdered by the South African state security apparatus with the help of Russian thugs. Unlike with the Jackal, we are rooting for the assassin all the way to Paris. But the odds are long and he’s outplayed at every turn.

Meanwhile in South Africa, the elite Serious and Violent Crimes Unit (known as the Hawks) investigates two apparently unrelated murder cases. In the first, an ex-policeman is supposed to have committed suicide by jumping off a fast moving train. There are several features that make that scenario unlikely, not the least of which is that at the autopsy a knife blade is found embedded in his spinal cord at the back of his neck. Nevertheless, the police commissioner instructs them to drop the case and confirm the original suicide verdict.

Later, a man known to Griessel’s commanding officer, Colonel Mbali Kaleni, is found dead having apparently shot himself in the head. This time everything does point to suicide except that the man has told his daughter that he expects to be assassinated and that she must call Kaleni if that happens. Even though Kaleni dumps the rule book, they are unable to solve the murder, and again they are forced to officially drop the case. Eventually, it’s up to Benny Griessel and his partner, Vaughn Cupido, to follow the cases without official sanction.

Griessel is a wonderful character with his love of jazz, his commitment to justice for the victims, and his struggle to remain on the wagon under the pressure of the things he sees on a daily basis at his work. His colleagues, Kaleni and Cupido, with their pride in their elite unit and desire to keep it free of the taint of corruption, are also rich and believable. Summing it up in a comment to the mixed race Cupido, Griessel says: “First you weren’t white enough, now you’re not black enough. You had the opportunity to take bribes, more than once. But you didn’t, because you were . . . You’re too proud of the Hawks, of what we do. I know what it means to you.”

The Griessel section of the story would be worth the price of admission on its own.

But Daniel Darret’s story also grabs us. He’s been through an awful mill, and now, no longer young, he feels forced to kill a man he once idolized, sacrificing the life he’s built for himself in Bordeaux. Meyer has a love of the city and has spent time there, and the sense of place in France is as rich as that in South Africa. When asked why he chose Bordeaux for his home instead of Paris: “Daniel said Paris was like a lover. She was beautiful and exotic, exciting and wild. She delighted and tempted you, and in the moments of ecstasy you wanted to possess her with all your heart. But she was not to be owned. Unless you were native born, her child.”

Weaving two apparently independent stories together, keeping the tension ramping in both, and bringing them to a simultaneous climax, is a challenging undertaking. Meyer pulls it off seemingly effortlessly. He’s that good.

A final note: the translation is excellent. You wouldn’t guess that the book was originally written in Afrikaans.