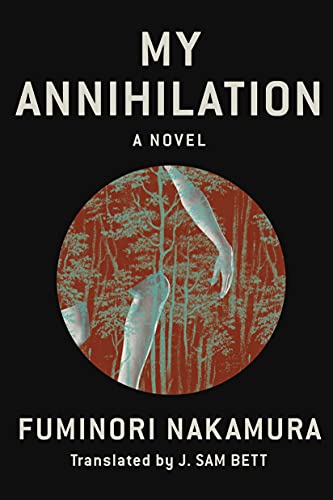 “a disturbing and thoughtful novel, almost surreal at times. . . . The author’s approach is low key and atmospheric, but this book will make you think deeply about what a human personality actually is.”

My Annihilation opens with a man in “a room in a rundown mountain lodge, and on the desk a manuscript, left open to page one, as if it had been waiting here for ages to be read.” We don’t know who the man is, and the twist is that he doesn’t know, either. He believes that he has murdered Ryodai Kozuka and assumed his identity—he has Kozuka’s identification cards in his bag. He guesses that Kozuka is the author of the manuscript in front of him, but on the first page it states “Turn this page and you may give up your entire life.” The narrator is rather contemptuous of that, but he shouldn’t be.

The manuscript is the story of Kozuka’s early life experiences, focusing on Kozuka’s half-sister, whom it implies he murdered, and his masochistic mother. The narrator has little interest in it. “These words were lonesome. At least to me. Why? Because the majority of people would be at a loss to sympathize with them. The odd one out is cast away. In that sense Kozuka’s story is similar to my own.”

He wants to dispose of a body in a suitcase he’s found in the room, and then escape with Kozuka’s papers, but then he hears someone ringing each of bells of the lodge’s rooms. When it’s the turn of his room, he pretends that no one’s there. However, using a passkey, a man enters anyway and tricks him into coming with him in his car, apparently believing that he is Kozuka. He is taken to a psychiatric clinic where all the issues are supposed to be resolved. However, there he is shown a catatonic man whom a doctor tells him is the real Kozuka.

Kozuka, it turns out, is a psychiatrist who had a passionate love affair with a heavily damaged female patient, Yukari. He hypnotized her to try to make her forget her past abuses, but although that works for a while, the awful memories inevitably return. Eventually, she insists he try electric shock treatment. This does succeed, but then she also forgets that she was in love with him. As Kozuka puts it, “You can’t just pick and choose the memories you want to disappear . . . If you overdo ECT, the memory loss can be total. You would have thought I understood that much. She gave me this long, curious look. Like she was innocently looking at a man she didn’t know. Her face incredibly cruel and beautiful to me.”

Yukari falls for another man who also loves her, but in the end she commits suicide.

So who is the narrator in the lodge? Is the catatonic man really Kozuka, and if so how did he get there? Who are the doctors at the psychiatric clinic? All this is revealed in due course, but that’s not really the point of the novel. Nakamura is interested in what human identity really is and how it can be manipulated by hypnosis, brainwashing, and even more extreme methods.

This is a disturbing and thoughtful novel, almost surreal at times. Nevertheless, it’s hard to deny that all of this could happen and much of it probably already has. The author’s approach is low key and atmospheric, but this book will make you think deeply about what a human personality actually is.