Dust Off the Bones: A Novel 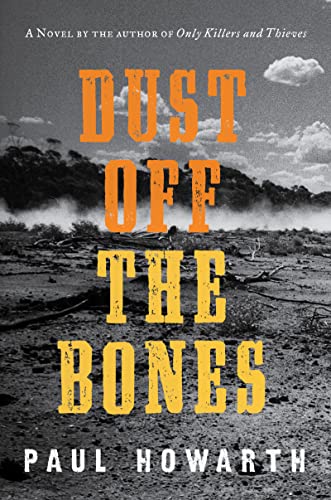 “Dust Off the Bones is a powerful historical thriller, vividly picturing the era as it focuses on a period of local history . . .”

Dust Off the Bones chronicles the lives of two brothers, Billy and Tommy McBride, who grow up at the end of the 19th century on a struggling cattle farm in outback Queensland. One day, aged 16 and 14, they return to their homestead to find their parents murdered, apparently by an Aboriginal retainer who has vanished.

They rush to the large neighboring ranch, where the owner John Sullivan and his much younger wife Kathrine live. Sullivan summons the local unit of the Native Police, a police division set up to control the Aboriginal people. The commander of the unit, Inspector Edmund Noone, is a psychopath, and he takes the opportunity to wipe out a whole Aboriginal clan, the Kurrong people, under the pretext that they were harboring the murderer. Actually, the suspect is not even with the group.

Noone takes Billy and Tommy with him and makes them participate in the slaughter. Afterward, Noone threatens them—they are to separate at once, never see each other again or even communicate, and keep their mouths sealed. If they don’t, their fate will be even worse than that of the Kurrong.

Given no choice, Billy stays with the Sullivans while Tommy leaves the area with Arthur, an Aboriginal companion. Some years later John Sullivan dies, and Billy develops a relationship with Kathrine, who has inherited the cattle station.

Both Billy and Tommy are deeply scarred. There is no way to put what happened behind them. Billy tries to make a life with Kathrine, but it’s shadowed by the lie about the past. Tommy leans on Arthur and drifts, trying to run from the past. It’s only much later that he’s able to come to a degree of acceptance:

“What had happened to the Kurrong, his role in it, what he’d done, was a part of him, a weight he would carry to the grave. And rightly so. Guilt was not a thing to be shed, but a wound, a scar, a permanent reminder like the gash in his shoulder or the missing fingers of his hand.”

Noone is never far away, and his vicious threats, which he never fails to execute without compunction, hang over everyone. He holds all the power and indulges himself however he wishes, destroying anyone who crosses him.

Years later, the one outside witness to the massacre approaches a human rights lawyer in Brisbane who forces an inquiry into the events subsequent to the murder of the brothers’ parents. Noone easily squashes it with aid of the local magistrate, whom he has in his pocket, but as he moves up to police commissioner, he wants to eliminate anyone who could testify against him in the future—including the McBrides.

Among a cast of rich characters, Noone stands out—a wonderfully convincing villain. Although Noone is not based on any real person, the Native Police was real enough, and the power it wielded in the outback was just as it’s described in the novel. It extended not only over the unfortunate Aboriginal peoples who suffered exactly the sorts of treatment described in the book, but also over the local whites who saw them as protectors of their small settlements and cattle stations and would turn a blind eye to their excesses as a necessary evil.

One of the attractions of the novel is that it brings to life the Australian outback of the time: people’s mindsets, how they lived. While the story may remind readers of the old American West, the differences are as clear as the similarities.

Tommy thinks about his travels this way:

“Half a continent nearly and there was still plenty out there he hadn’t seen. But he understood this country better now than he ever had: it was easier if you accepted the land was king. Most whites struggled because they fought it, tried to bend it to their will, but this wasn’t a place that could be tamed. Better to live within it, alongside it, on its own terms—how long had the natives lived like that happily before the first boats came?”

Dust Off the Bones is a powerful historical thriller, vividly picturing the era as it focuses on a period of local history that shames not only the McBrides.