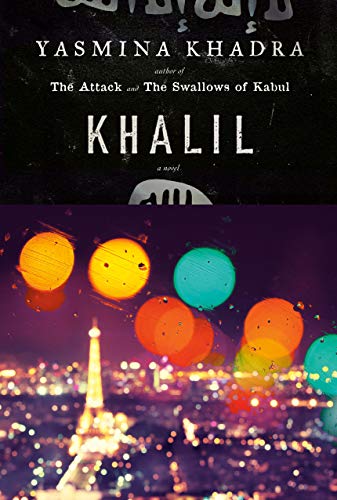 The story is narrated by Khalil, a young man from Morocco whose family has settled in Belgium where he grew up. He’s been alienated from his family by an abusive father, and doesn’t fit into the ambient society. He has only a few friends, all from strict Muslim backgrounds, and although he’s close to his younger sister, he sees her seldom as she lives at home with their parents.

Khalil starts where most terrorist thrillers reach their climaxes—when four suicide bombers are on their way to cause mayhem in a football crowd and on the Metro in Paris. Three are successful, although their deaths result in much less loss of life than they’d hoped. But when Khalil presses his button on the packed underground train, nothing happens. He is totally shocked. Not only has his mission failed, and his path to God aborted, but he’s penniless in the city with no identification and police everywhere.

“I came back to myself on a platform, in the midst of a frantic scrum that was propelling me toward other corridors. . . . I don’t know how I eventually made my way to the street. The fresh air brought me back down to earth and chilled the sweat on my body, but I couldn’t say whether it was fear or cold that made me shiver from head to foot. . . . All that could be heard were whooping sirens, which never stopped calling to one another in the night.”

He manages to persuade an old school friend to drive to Paris and pick him up, spinning him a story about a mugging. He lands himself with the friend for a while, and then on his elder sister, Yezza, an embittered spinster, while he tries to work out what went wrong. When he disassembles the explosive belt, he sees that the button has been deliberately disconnected. Neither Yezza nor the friend know about his mission, and he keeps lying to both of them. Far from being grateful for their help, he’s bitter and dismissive. His alienation outside his brotherhood, Fraternal Solidarity (FS), an ISIS affiliate, is universal.

As things cool down, and the police don’t seem to be on his trail, he reconnects with FS. He’s told that he received a training belt by mistake (really?) and is to standby for a new mission, this time in Morocco in revenge for the killing of a FS leader. While this is being planned, his younger sister is killed in another suicide bombing, a remarkable coincidence, throwing him into turmoil especially as the news has been kept from him. Eventually, in search of some sort of contact, he calls Yezza. She bewails their sister’s death, but in the end Khalil has no answers for her.

‘Fuck fate. What are we, really? Numbers in a game of chance? What the hell is it we’re supposed to do on earth, eh? Make the people dearest to us suffer? I detest life, I detest what it represents, and I detest what it hides. I’m mad at the whole world.’

Although described as a thriller, the story moves along inexorably at its own pace toward Khalil’s desired conclusion. Now he has the opportunity to strike back at the Moroccan upper crust who have targeted his brotherhood, and to die gloriously in the service of his God. The ending has a twist, but it doesn’t really feel right.

There is much to like about this novel. It’s well worth reading for the fluent writing and the strong, memorable characters alone. While we can’t like Khalil, or even sympathize with him, we come to pity and to some extent understand him. The flaws lie in the plot where contrivances seem to address the author’s needs rather than those of the story. Perhaps Khadra’s previous acclaimed works set the bar too high for this one.