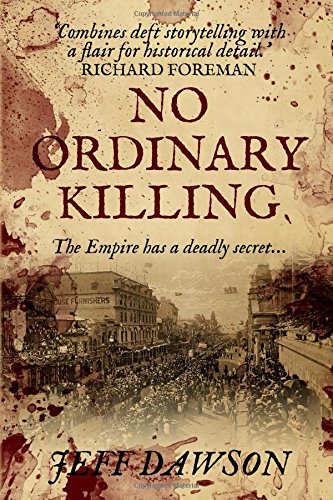 With his debut novel, No Ordinary Killing, Jeff Dawson has given us a fascinating look at the South Africa of the beginning of the 20th century at the same time as crafting an intriguing mystery thriller with rich characters.

The Boer War was a defining event for South Africa for practically the whole century, creating a country but at the same time further fragmenting the peoples of that country. In some ways it was the Vietnam of the British Empire—a war with huge popular support (troops came from all the dominions), but also disgust and, ultimately, rejection.

The story starts with a British lieutenant who has been smuggled out of Kimberley past the Boer siege by Mbutu, a black man renowned for his speed and knowledge of the area. However, the lieutenant tries to kill Mbutu, and shortly after is injured in a skirmish. He is rescued by Captain Ingo Finch, a doctor in the Royal Medical Corps.

After that the scene switches to Cape Town and the Karoo area of the Cape, but the war is ever present in the background. Almost by accident, Captain Finch becomes involved in the investigation of the Christmas Eve murder of his commanding officer, Major Cox. There are plenty of twists, turns, and red herrings, but it soon becomes clear that there is something much deeper going on than an ordinary killing.

Meanwhile, Mbutu is stranded away from his family in Kimberly. He links up with a group of Nama people (bushmen) in the Karoo and their complementary skills allow them to survive. Later they come across a white woman and her child hiding in a small cave after a horrific experience at the mission station where they lived. Mbutu and the leader of the Nama group go to investigate what has happened to the missionary and their village. The events that took place there turn out to be intimately connected with the reason for the major’s death.

Mbutu is a memorable character. Although he is separated from his family, beaten up, shot at, and treated with contempt, he watches the white people go about their business with an almost academic curiosity devoid of rancor. His empathy for the various people he comes across rings completely true. One quibble is that the two themes don’t really mesh at the end, and Mbutu’s important evidence, obtained at risk to his life, doesn’t really play a role. In fact, after a brief meeting with Finch at the squalid refugee camp where he ends up with his Nama group, Mbutu disappears altogether until the epilogue.

Finch’s role as a doctor and his own personality give him a more sympathetic view of the situation than most of his colleagues, and he has his doubts about the war. He finds himself more in tune with the spectrum of local people with whom he interacts. As the Afrikaans lady who runs the establishment where Major Cox boarded says, “The British seem very convinced that they can just walk into a stranger’s house and put everything to right.” She also notes her people’s perception of lack of even-handedness when she says, “There have been Dutch here since 1652, Portuguese since the 1480s. There have been Europeans in South Africa longer than they have been in the Americas. For some reason, history has never accorded us the same legitimacy.” As for the blacks, they are almost treated as extras in the conflict between Europeans although they suffered the lion’s share of civilian casualties.

The book starts as a classic mystery—almost reminiscent of Conan Doyle (who was also a medic in the RMC and who actually makes a brief appearance in the book). There’s even the search for a mysterious Moriarty. But once Finch and Nurse Annie Jones—a volunteer nurse form New South Wales—link up and are targeted by the people who want their secret kept at all costs, it moves to thriller mode and a cliff-hanger finish.

Dawson has written a gripping book, which is much deeper than the run of the mill historical thriller. We think about the issues he spotlights well after the last shot has been fired.