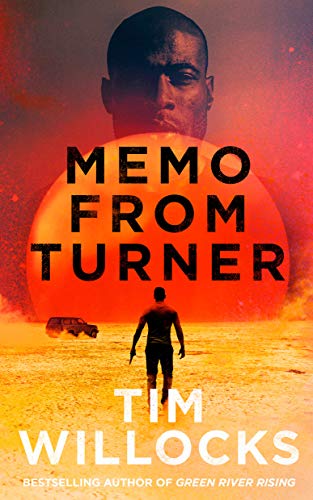 The “memo” of the title is a recording that Warrant Officer Radebe Turner makes when he’s being hunted down in the Northern Cape. He’s expecting to be killed, and he wants his boss to know what happened—not so that he can revenge Turner, but so that that he can right the wrong Turner has been investigating. We have to wait until the end of the book to discover how it actually plays out. Unlike many run-of-the-mill thrillers, we really don’t know what to expect until then.

The story starts with a hit and run after a group of rich young white men make fools of themselves with drink and a gun at a shebeen (communal drinking house) in Nyanga, a dangerous black township area in the Cape. Since the victim is a homeless girl who dies at the scene, everyone assumes that the matter will be ignored. Who will care?

However, Turner cares and makes it his business to track the culprits to Langkopf, a mine in the middle of nowhere in the Northern Cape. The driver turns out to have been the son of a manganese mine owner, Margot Le Roux, a woman who chews nails and spits out the pieces. She has the whole town— including the local police chief—under her thumb. Their mantra is: “Margot gets what Margot wants.”

Up to this point, one might not much like the book. There is little sense of place, and Turner has little convincing backstory for either his rigid passion for justice or his consummate skill with weapons. He strikes one as the Jack Reacher of the South African Police Service. One expects it to play out to a predictable violent resolution between the good guy and the bad guys. One would be wrong.

In the first place, Dirk, the driver of the vehicle, is a liberal and principled young man who has just qualified as lawyer and wants to be able to help disadvantaged people with his legal skills. He was too drunk to remember the accident, and Margot wants to make sure it stays that way. She knows he will turn himself in if he finds out. Although if he pleads guilty he will probably get off with a suspended sentence, he will never be able to practice law. The tension is in the clash of wills between Margot and her husband Hennie—who will do anything for her—and Turner.

There is also tension in the ambivalent relationship between Turner and his white boss, Colonel Venter.

‘‘‘You’re the patron saint of the violently dead,' Turner had once told him, intending this as far as Venter could tell, as a sincere complement. Venter oversaw the machine tasked with honoring those dead with something approximating justice.” And later, “Turner managed to be superb without being vain. He was everything Venter was not and Venter hated him for it.”

However, the climactic battle is between Turner and himself, and this is what sets the thriller apart from others of its ilk. Eventually, as he is being dragged into the desert to die of thirst, he is faced with the choice between being killed —and thus betraying the cause of the dead girl—or betraying his principles in order to stay alive. It’s a grueling scene, but one that lifts the book to a different level. Now Turner sees things differently. “Turner felt an ache of sadness. For all they had done to him, he couldn’t find it in himself to see Margot, or Hennie, or the rest of them, as evil. They had done evil things. But so had he.”

After that, there’s an inevitability to everything that happens that is just right. The powerful characterizations of Turner, Hennie, and Margot make this a book that you won’t forget in a hurry.