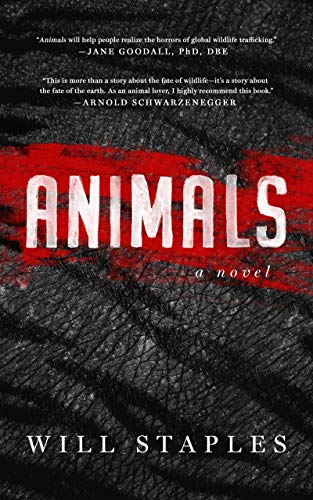 “Animals is not light reading, but the writing is strong and the characters and story believable.”

The author introduces the novel with the sentence: “This is a story about animals, some of which happen to be human.” None of the human animals turns out to be particularly appealing, and many are simply awful. Apparently, the extensive research and travel for the book was motivated by a possible screenplay, the arena where the author is well-known.

However, the more he learned the more intensely he became involved, and Animals is the result. All his proceeds will go to wildlife charities. There are several gruesome scenes, usually with endangered animals as the victims, but they ring true. Staples’s knowledge of the rhino poaching and horn smuggling world in southern Africa is spot on.

The story unfolds from the points of view of three main characters. They are flawed, but they develop during the book and are forced to face the consequences of their actions.

The first is Cobus Venter, a South African who is part of an anti-poaching team in the Kruger National Park. The frustration of their failures to save the priceless wildlife there depresses them all.

“Flanked by Basani and Lawrence, he marched along the mud at the edge of the Letaba River. Crocodiles lazed in the shallows, and lions perched on the rocks, preening and licking their chops. It was a strange thing, Cobus mused, dedicating your life to protecting creatures that were naturally inclined to kill you.

Basani had been in an increasingly dark mood since her husband died. The futility that had surrounded her now lived with her. Her job was protecting animals, and she was beginning to feel like the caretaker at an abattoir.

“‘The only way these animals will ever be safe is if people stop buying them,’ she muttered as the rangers plodded forward.”

After Busani is killed, the frustration of trying to protect the rhinos overwhelms Cobus, and he resigns to head off on his own mission. That mission is to infiltrate the rhino-horn dealers in China and to sell them horn treated with strychnine to sicken or kill the users and thus discourage the trade. (While this has been mooted in the past, and even used as ascare tactic on occasion, no authority could actually countenance such an approach.) He starts by pulling off a daring heist to grab the national park’s stockpile of rhino horn.

The second is Randall Knight, an insurance assessor who specializes in insuring pricey animals for wealthy racehorse owners and zoos. He prides himself on making life better for the animals, ensuring that they are well looked after and protected. However, his major motivation is money. He discovers a project to breed tigers for consumption—currently illegal but in the story about to be legalized. He sees an opportunity for his company to become involved, ensuring not only appropriate animal husbandry but also that the tigers are, in fact, bred and not poached from game reserves. However, he is forced to face the vast gap in philosophies between East and West when he meets the Sky Dragon, the triad kingpin, at a restaurant in Myanmar over a dinner of tiger steak:

“‘Here, they say we eat everything with four legs except the table.’

‘And everything that flies that isn’t a plane,’ Knight countered familiar with the old joke about Chinese dietary habits.

‘In the West, you decide that some animals are friends and some are food.’

Knight saw his opening. ‘I believe some animals are a product, and there is good business and bad business . . . if you want to know what I think of tiger meat, honestly, I think it tastes like cat urine, and that tiger wine just tastes like cheap sake. But we aren’t here to discuss food. We are here to discuss the future of your family.’”

Knight finds his spoon isn’t long enough when he sits down to sup with this devil.

The third main character is Audrey Lam, a policewoman in Hong Kong. Committed to upholding the law, she battles as a single mother whose child is dying of lymphoma. Despite it being illegal, she’s eventually driven to trying rhino horn. It turns out to be from one of the batches that Cobus has poisoned. Although her son manages to survive, the shocking experience scars both her and Cobus.

Animals is not light reading, but the writing is strong and the characters and story believable. It should be required reading for anyone who thinks animal trafficking isn’t serious. As if Covid hadn’t already taught us that lesson . . .