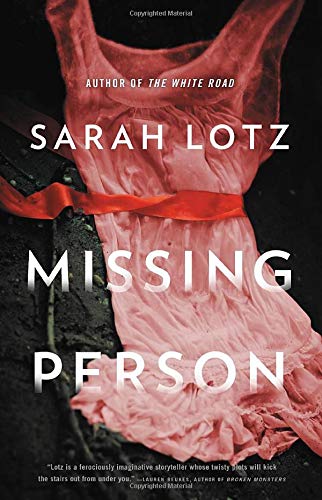 “Lotz has written a thoughtful thriller that is as much about the psychology of people who hide in various ways than about catching a murderer.”

Sarah Lotz has made a name for herself with twisty thrillers plus a touch of horror, starting with The Three. Missing Person has no paranormal element. It’s a psychological thriller focusing on a sociopath and the members of an Internet forum who set out to find missing people and, if possible, trace the perpetrator. It’s not a dramatically new premise, but Lotz gives it quite a different twist.

In the first place, Pete, the murderer, joins the group himself—partly to keep an eye on what they are doing and how close they are getting to the truth, but just as much to have fun at their expense. His idea of fun, that is.

The story is told from the points of view of several of the characters—and some exchange of text messages—and when Pete takes the baton, he faces his own motivations and the reasons behind what he’s done. It rings true—people like him must surely do that. Lotz has made a thoughtful attempt to do it convincingly from inside his head. As Pete puts it more than once, “In any case, he wasn’t a serial killer. You didn’t earn that label if you’d only killed two people.”

And he doesn’t want to increase that score. He’s started a new life with a rich partner and good prospects. This is the new Pete. “His past self was reckless, acted without thinking things through. He’d vanquished the stress, but the urge to up the manipulation, play God, see how far he could push this was seductive, akin to standing on a high bridge, looking down and allowing the lure of gravity to tempt him over the edge.” Later he’s forced to realize that he can’t divorce himself from the past Pete. “The stain of his old self bled up from the layers of the new—it wasn’t going anywhere.”

Missing Person is a character driven novel; don’t expect to be on the edge of your seat for the 470 pages. Just as much as understanding Pete, we come to know the members of the Missing-linc.com web forum, all sheltering behind online names. What is driving them to this seemingly hopeless, apparently lonely, and ultimately dangerous quest?

The story starts in Ireland when Shaun discovers that Teddy, his beloved uncle, had not died in an accident as he’d been told, but had been spirited off to New York to avoid a huge scandal. Shaun is by no means an action hero. Unsuccessfully gay, his life revolves around his scruffy dog Daphne that he inherited from his mother, and his uninspiring job at a local bookstore. (Sometimes they are delightfully in conflict as when Daphne has “shed all over the latest batch of Michael Connellys.”)

Although he’s tempted to leave it alone, he’s angry about the years of lies and wants to find out what really happened. The more he’s threatened and told to drop it, the more committed he becomes, but he has no idea how to proceed. Eventually, he posts an Internet request aimed at anyone who can help him find Teddy.

And that is picked up by Ratking1, the leader of Missing-linc.com, who puts two and two together. She is wheelchair bound and started the group in search of her lost mother, but now her life revolves around it. It’s a small group with committed moderator Mommydearest and overly enthusiastic participant Rainbowbrite. They are joined by a couple of new members, one of whom is Pete.

It’s this motley group that have to make progress on the case while struggling with their personal issues, and rather against the odds they do so. They identify a body found years ago in Minnesota as Shaun’s uncle. Later they link that case to a missing local girl. Round about then, Pete realizes that they’re getting too close and needs to do something about it.

Lotz has written a thoughtful thriller that is as much about the psychology of people who hide in various ways than about catching a murderer. The Internet is front and center, but this book is about the people.