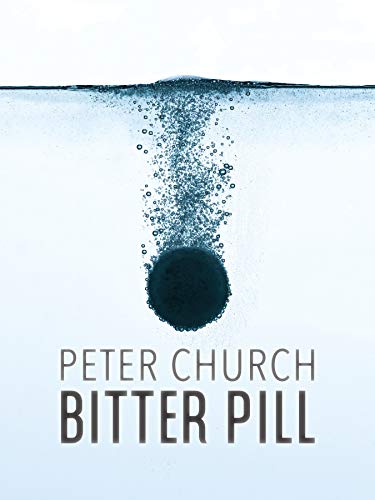 “Bitter Pill has a strong plot that keeps the pages turning, but it’s the insightful studies of evil—Carlos, Lynch, and Chester—that make the book memorable.”

This is the third book in Peter Church’s trilogy centered on a malevolent pornography organization that skulks on the dark web. In Bitter Pill, the protagonist, Robbie Cullen, is a student at the University of Cape Town who becomes caught in Dark Web’s tentacles, but the most intriguing characters are the two antagonists. Julian Lynch is one of Dark Video’s customers who has graduated from pornographic material to ordering drugged girls for sex. During the story his obsession grows, and he eventually loses all touch with reality. It’s a horrifying progression.

In parallel, we follow the exploits of Carlos Da Palma, the mastermind of Dark Video. He has his own obsession—not sex, which hardly interests him, but the paranoia of remaining completely hidden from the FBI, his clients, his operatives, and even his computer wizard, Jacker. He trusts no one except Samuel Chester, his hit man.

“He’d advised Jacker to stop thinking and start following instructions. That, he mused, was the difference between Jacker and Chester. Chester was an artisan. He followed instructions. He wasn’t paid to think or have emotions. He was like a rocket bomb sent to travel silently through the night. But he was a rocket with no power of his own. He stood cold and dormant until Carlos programmed the destination and pulled the pin.”

The two are sociopaths but twisted differently by their obsessions. What makes them so scary is that they are both completely believable.

Robbie has a chance encounter with a woman named Fallon at a nightclub and has to rescue her from an attacker. Afterward she tells him she’s an uncover police agent trying to break the Mickey Finn Club—the group of barmen who spike girls’ drinks with a date rape drug so that they can be kidnapped for delivery to clients. She gives him money and makes him promise not to try to contact her lest he blows her cover. Robbie naively believes her.

Some days later, he bumps into Fallon again at a rich friend’s beach house, but she pretends not to know him. He’s not too disappointed because there’s plenty of other female talent after him. However, when he returns to Cape Town he discovers that he was secretly filmed and now features in a sex video himself. Concerned about the reaction of his parents and friends, he tries to stop its spread, but only gets himself deeper into the machinations of Dark Video’s new girl delivery service.

In parallel, we follow Lynch’s descent into madness. He becomes more demanding of the girls and eventually kills one that disappoints him. He obsesses about a particular girl who was featured in one of Dark Video’s films, and he sets out to kidnap her himself.

“Terry Phillips would be his; he knew it with utter certainty . . . That morning Lynch had written Terry’s name in bold print across the top of a new page in his journal. He’d printed out another image taken from the Forest Frolic clip, and pasted it at the center of the first page. He planned to dedicate a number of pages to her. She’d be number ten.”

Things aren’t going well for Carlos either. Clients are being arrested. Someone seems to have their names although that should be impossible since no list of them exists. Carlos comes to believe his problems originate in Cape Town, and he dispatches Chester to eliminate them, including Robbie and Fallon.

“The Fiesta stopped just twenty meters away. The enormous man emerged, Robbie shuddering as he recognized the gunman. Unmistakable.

Robbie picked up the frightening pitch of his hunter’s voice. His body readied for flight. But if he made a break for it now, the man would have several free shots at him through the fence . . . Robbie kept his head down, barely breathing. If he heard the fence take the man’s weight, he’d make a dash for it.

His assailant consulted the object in his hand again, sang out once more: “Never have seen such a thing in his life.”

The thriller accelerates to a climax where the strands come together in a way that’s satisfyingly natural, but still unexpected. Bitter Pill has a strong plot that keeps the pages turning, but it’s the insightful studies of evil—Carlos, Lynch, and Chester—that make the book memorable.