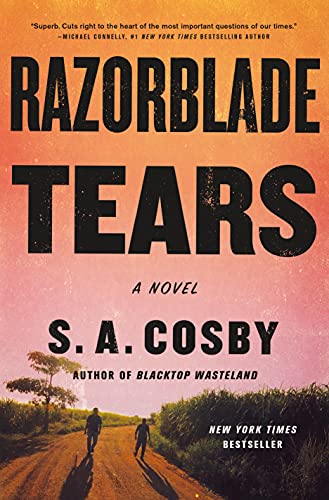 S.A. Cosby continues his searing stories of the rural south in Razorblade Tears, which follows his explosive Blacktop Wasteland. Two grieving fathers—one Black and one white. Their connection is that their sons were a married gay couple, a relationship that they’ve never accepted.

Ike Randolph has been out of jail for 15 years, with not so much as a speeding ticket in all that time, and he’s built a successful landscaping business. But a Black man with cops at the door knows to be afraid, and when he’s told that his son and his partner have been brutally murdered, his world is turned upside down.

The other father, Buddy Lee, was also a criminal in his day, and he tries to persuade Ike to help him find out who killed their sons and why. At first Ike refuses, content to leave it to the police. He knows that once they start a hunt there will be no stopping until a finish that may suck them dry and spit out the husks. However, when the young men’s graves are desecrated, he agrees. He lays down the ground rules.

Apart from their criminal past and the connection through their sons, the two men have little in common. They don’t trust each other, and they don’t like each other. Although not ostentatiously racist, Buddy makes comments like, “Just don’t know many of your kind that are into country (music).” Ike closes that sort of talk down very sharply. What they do have in common is that they are both tormented by their failure to even try to understand their sons. Each must face his prejudices and what they meant to their lost sons and the family relationships that now can never be repaired.

As the tension ramps up the two become friends of a sort. Once they’re on the trail, nothing stops them, and as they get closer to their target they become prey as well as hunters. A motorbike gang calling itself the Rare Breed trades in guns, murder, whatever it takes. They are the enforcers for the people behind the murders, and they have no problem adding the two fathers to their hit list. The leader Grayson expects unquestioning obedience from the gang and he gets it.

“‘We gotta break in the place?’ Oscar asked.

“‘Did I fucking stutter? Did you not just hear me say you gonna have to break in the place? What the fuck is wrong with you?’ Grayson said. He punctuated each sentence by slamming his fist into the table.” Grayson is as vicious a villain as you could hope not to meet.

Razorblade Tears is an edge-of-the seat thriller, but the vivid dialogue, the relationship that develops between the two men against the odds, and the social commentary embedded in the story, make this also a top-notch literary novel. If one wants to be picky, one could say that a couple of the plot devices seem familiar from Blacktop Wasteland, but so what? They work here, too. Buddy and Ike are gripping characters you won’t forget for a long time.

This is one of the best thrillers of the year.