The Survivors: A Novel 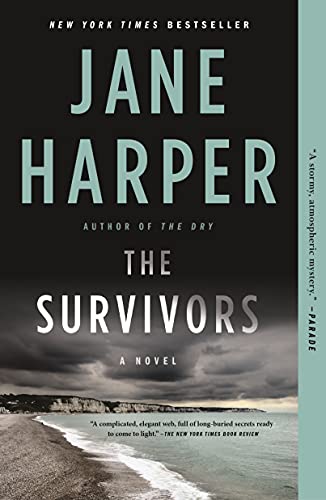 “This is both a clever mystery with a satisfying ending as well as a tense thriller driven by people, not by neat contrivances. Jane Harper has pulled off another stunner.”

The Survivors is set in Evelyn Bay, a small town on the south coast of Tasmania that relies on summer tourists. Kieran and his partner, Mia, grew up there but went to college in Sydney where they now live with their baby daughter. They have returned to Evelyn Bay to help his mother pack up their home. His father is rapidly sinking into dementia, and she’s forced to move him to a care home in a larger town.

Harper has a talent for integrating her setting into the story in an absorbing way. The sea is the fabric of this novel. The town lives because of it, but it’s an enemy as well as a friend. It demands respect. A sculpture named “The Survivors” shows three figures looking out to sea toward the site where a ship ran aground and sank killing most of the people on board many years before. The statue can be almost covered in high seas providing a barometer of the ocean’s mood.

We immediately sense the simmering tension in the town dating back to the events of 12 years before when a freak storm attacked the coast. Kieran’s carelessness had left him floundering in the raging sea.

“The Survivors were gone.

“Where they should have been standing solid and secure with their heads rising above the water, there was only angry ocean and a gray-black horizon. They were fully submerged, swallowed whole by the swell. Kieran had never before seen that. The fear that had been brewing inside him, strong and dark and deep, exploded to the surface.”

A distress call went out. His idolized elder brother and the father of his best friend had headed out in their ocean-going catamaran despite the huge waves. Kieran had managed to reach the shore unaided, battered but safe, just in time to see the boat capsize and watch the two men drown. His physical injuries healed, but the guilt had weighed him down since that day.

The same day, a 14-year-old girl had vanished. Her backpack of books had washed up onto the beach three days later, but her body was never recovered. Although it was generally accepted that she, too, perished in the sea, her mother has never come to terms with that.

These wounds have never fully healed, but life goes on in Evelyn Bay. Then, the day after Kieran and Mia arrive, a young arts student who is spending time there working on her projects is murdered at night on the beach. Circumstantial evidence seems to point to the son of one of the men who drowned or possibly even to Kieran’s demented father. At once the simmering animosity in the town reappears and a local chat site goes wild with accusations and innuendo. A thriller writer, George Barton, who has recently moved to the town sums it all up to Kieran like this:

‘“I really hoped to stay here long term, but now—’ George looked tired. ‘I’m not so sure. Places like this, they need to be tight-knit to work. Once the trust is broken, they’re stuffed. Whether people see it or not, the writing’s on the wall.’”

The police appear to be making little progress, but a smart detective from Hobart with her team clearly suspects more than they are letting on. Where are the girl’s missing camera and laptop? Why do the police care so much about them? The townsfolk would like to believe they were taken by an outsider, a passing thief. The tension generated by the fractious relationships within the town is stoked by an angry outburst from the murdered girl’s mother at a public meeting after a local pushes that point theory.

“‘I think he’s wrong. I think it’s one of you.’ There was silence. ‘But maybe not. I don’t care. I just want the truth. So either way, no stone left unturned. If you’re out there—’ She scanned the room again, not so slow and steady now. ‘If you’re hoping this will go away, you’re going to be waiting a long time. . . . So unless you want every secret in this place dragged to the surface, I recommend everyone in this room opens their mouths and starts talking.’”

Everything about the people in the town rings true as it would for any small coastal town anywhere that has a past. There are red herrings, but they arise because of the real people who live there not because the author wants red herrings. This is both a clever mystery with a satisfying ending as well as a tense thriller driven by people, not by neat contrivances. Jane Harper has pulled off another stunner.