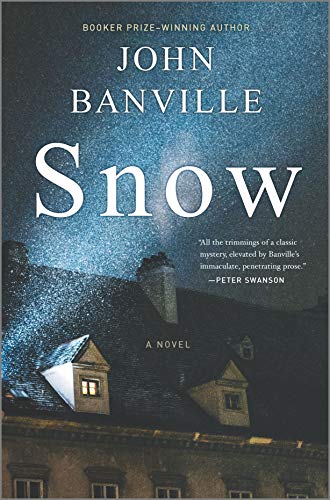 “enjoy the complex characters drawn with beautiful prose and flashes of humor . . .”

John Banville takes us to the Irish countryside in the last days before Christmas 1957. It’s been snowing and it goes on snowing, off and on, until Christmas Day. The Protestant landed gentry still have their manor-house ancestral seats, their foxhunts, and their positions in society, while the Catholic Church holds the real power. To just such a manor, Ballyglass House, gently decaying, Detective Inspector St John Strafford is called to investigate a murder. A priest, known as Father Tom, has been stabbed, mutilated, and left to die in the library. Such a thing is unheard of in Ireland, and the Church wants it to stay that way.

Tongue in cheek, Banville introduces us to a cast of clichéd characters from an Agatha Christie novel. The bumbling Colonel Osborne, decorated at Dunkirk and lord of the manor, his supercilious son Dominic, his bored and wild daughter Lettie, and his much younger and addicted second wife Sylvia. Even the plump, rosy-faced housekeeper fits the mold. This deliberate set up is not lost even on Strafford—certainly not the brightest detective in the Guard—who notes that: “Everyone seemed to be in costume, seemed to be dressed for a part. They were like a cast of actors milling about in the wings, waiting to go on. . . . Why even apple-cheeked Mrs Duffy was all too plausibly the stock family retainer.”

Yet these are not actors. These are real people, much deeper than their caricatures suggest. Then there’s the dangerous young man Fonsey, regarded as not entirely normal, who lives alone in the woods and does odd jobs. But the most menacing character is the archbishop, who makes it clear what he wants, and what will happen if he doesn’t get it, in the politest possible way.

Strafford lodges at The Sheaf of Barley pub in the neighboring village, and meets a literature-quoting publican, his wife, and a red-headed bar maid. Later, the illegality of condoms in the Ireland of the time becomes a minor problem for him.

Strafford is puzzled by the case and equally puzzled by why he was chosen to investigate it in the first place. He knows he’s not a star detective. “He had no illusions about the task facing him. Hacket had sent the wrong man, perhaps deliberately. Strafford wasn’t good at solving puzzles, everyone knew that. His mind wasn’t made that way.”

And yet later we see a deeper side of him. “He didn’t really know himself, and didn’t care to. His life was a state of peculiar calm, of tranquil equilibrium. His strongest drive was curiosity, the simple wish to know, to be let in on what was hidden from others.”

Slowly the reader discovers Father Tom’s character from the people who knew him, and the reason for the murder is clear long before Strafford catches on. Toward the end, there’s an “Interlude” where what we already know is spelled out.

While we wait for Strafford to catch up, we enjoy the complex characters drawn with beautiful prose and flashes of humor, and watch as the snow deepens, eventually shrouding Strafford’s sergeant. We won’t necessarily remember the plot, but we won’t forget our visit to Ballyglass House.