The Body Outside the Kremlin: A Novel 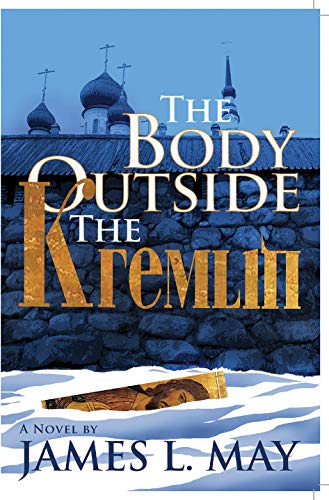 James L. May has written a remarkable debut novel that brings to life one of the worst periods of soviet history. The novel moves slowly, but that merely reflects that everything moved slowly at the Solovetsky prison camp in 1917. If it moved at all. The grinding misery of the gulag, and its human representatives, is the real antagonist of this story.

The narrator, Tolya Bogomolov, is a mathematics student serving a three-year sentence. His offense is minor, yet he knows his chance of survival is not particularly good. However, the reader knows he will survive because early in the book we learn that he’s writing his account of the prison camp some years after his eventual release.

The dreadful part is that his current situation is far from that of a free man. Although he’s no longer in danger of starvation, he is still an outcast with no hope of improving his menial position. By his meticulous historical research and his careful reconstruction of the Solovetsky prison era, May has developed a painfully moving story. It is also an intriguing mystery.

Before the revolution, the Solovetsky islands housed a famous monastery. The Bolsheviks closed the monastery and imprisoned the monks there but allowed them to continue their lives in exchange for their fishing expertise. The monastery contained a priceless collection of icons, which is housed at a museum in the prison. Ostensibly set up to illustrate the wasteful ways of the church, the museum preserves some of the most special paintings.

Tolya, who is new to the island, is looking for a patron who can help him obtain a less brutal work assignment or a little more to eat. He befriends Gennady Antonov who holds a privileged position at the museum because of his ability to restore the icons. But when Antonov's body is discovered floating frozen in the bay, Tolya is called out by a member of the Cheka, the Bolshevik secret police who administer the camp. Surprising, this turns to his advantage when he’s assigned to help another prisoner, Yakov Petrovich, investigate the death.

The book is filled with strong characterizations, and Petrovich is among the most interesting. A retired policeman who worked for the Tsar’s government, he’s thrilled to be a detective for one more case. Tolya is a fan of detectivs (detective fiction) and so he believes he can assist, but Petrovich is not impressed:

“I know what solving a crime is really like. In those things they always find just the right clue at just the right time, so that no one has to do any real work and the detectives are free to apply their fists to whomever the crowd wants to see punched.”

The investigation proceeds slowly—partly because of the constraints of the camp—but the two men make a good team until Tolya falls for a woman prisoner who may have important information. Years later he muses about how her beauty showed through the grime and her prison clothes:

“But when her sleeve pulls back as she moves her arm to place a cup on a shelf, or to lace her boot—something shows, something naked and lovely. Most of all a wrist moves, a verb. Veronika Fitneva’s wrists rippled in response to her thoughts. They spilled out a cascade of unconscious, minute gestures, so that you felt that to know the range of movement of the wrist would be to know all its owner’s moods.”

Just when they seem to be making real progress, the Cheka abruptly cancels their brief investigation, and immediately after that a group of prisoners is rounded up and shot. Although Tolya and Petrovich are spared, Tolya knows that he has to solve the case at all costs if he’s to survive, and that now he has to do it on his own. Steadily, this well-structured mystery builds to a climax. Tolya survives, but only at great cost to himself.

Although The Body Outside the Kremlin is in a completely different setting and time period, it will not disappoint enthusiasts of A. D. Miller’s Snowdrops and M. C. Smith’s Gorky Park.