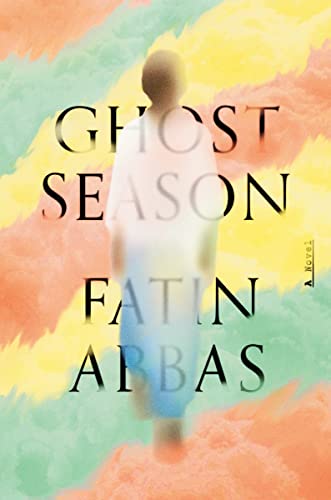 “Abbas has drawn a rich and believable cast of characters, and we feel sympathy and involvement with them all.”

Ghost Season is set at a non-government organization’s facility in Saraaya, a town near the border between Sudan and what is now South Sudan. The Sudan conflict was between the Muslim Arab “nomads” from the north, who run the country, and the black Christian Nilotes of the south whose rebel movement is trying to carve out a southern state. With multiple ceasefires and negotiations, a delicate balance existed between conflicts. Much of the novel’s tension is driven by the collapse of this balance amid the rapid deterioration of the political situation as the frictions between the nomads and Nilotes mount.

The five main characters live at the NGO facility. Dena was born in Khartoum, but her parents moved the family to the US many years earlier when the military dictatorship took over the country. She’s making some sort of documentary, but although she’s a talented photographer she has little real engagement with the local people and no clear idea how the shots she’s been collecting will fit together.

Alex is an American geographer tasked with making modern maps of the area, but he has little interest in the peoples of Saraaya and is impatient with the authorities whose help he requires for his work. He relies on William, the Nilot translator, who is also the de facto manager of the NGO facility, although Alex treats him as his subordinate. When younger, William had ambition to make his fortune in Khartoum, but:

“He’d given up on wealth, on success, and was disillusioned enough to understand that not everything was within his grasp. That life treated you differently based on where you were born and who you were born to, and there was nothing you could do about it. And so with age he had readjusted his expectations. He was intelligent, educated, likable, handsome, even, but a Southerner nonetheless. All he wanted, all he hoped for now, was a wife, children, a home.”

This aim seems attainable as William is in love with their cook, Layla, who is a nomad and took the job after her parents lost their cattle herd and were forced to look for other income. Layla reciprocates his feelings.

The cast is completed by Mustafa, a young Nilot boy trying to support his mother and siblings by doing odd jobs at the NGO, and finding friendship and more supportive adults in the process.

Yet, everything reminds Mustafa of his poverty:

“Innocent objects around the compound such as Alex’s beautiful washbag hanging off a nail in the bathroom. It’s luxurious gleam of blue nylon. . . . Sometimes he stood for minutes, eyes tracing convex outlines of the washbag, angles of fabric winking under sunlight, blue changing from metallic to almost black along its shadowed nooks.”

In an attempt to make a little more money to help his family and buy himself some sort of future, Mustafa tries selling women’s underwear. When that fails, he gets mixed up with the rebels. That, and the escalating tension between the two population groups, causes the situation to spill over into the NGO’s compound. In an internecine conflict no one is immune. William notices this almost at once:

”Some of the nomads he knew passed their eyes over him as if he were invisible. When he went to their shops, they refused to serve him. The privilege of his job with the organization, wrapped around him like a protective cloak, was evaporating. His good English, his relationship to the white man, his neat clothes, the organization’s truck that he drove, were suddenly offensive, made him a target. He was a Nilot who did not know his place, had forgotten that this town belonged not to his people but to the other side.”

Early in the book, a burned body is discovered and taken to the NGO. The police have no real interest in the matter. The body is unrecognizable, and they don’t know whether to bury it in the Christian Nilot section of the cemetery or the Muslim nomad section—a dangerous conundrum. Who was killed, by whom, why? This haunts the locals and the personnel at the NGO. William even fears that it may be Layla who is missing from the compound.

Abbas has drawn a rich and believable cast of characters, and we feel sympathy and involvement with them all. William’s gentle love story across race and religion with Layla is both charming and apparently doomed as the war creeps closer. Mustafa is unforgettable, an eleven year old fighting for a life in a world of largely hostile adults—sleeping in a tree to avoid petty thieves and pedophiles. Alex and Dena start with an almost disdainful outsider’s view of Saraaya, but they too become sucked into the fate of the local people as the tensions flare.

Abbas adds just the right amount of sense of place to paint the scene and the cultures without letting it get in the way of her characters and their stories. Ghost Season is a wonderful debut from a truly talented writer. This is an author to watch and, above all, to read.