Even the Darkest Night: A Terra Alta Novel 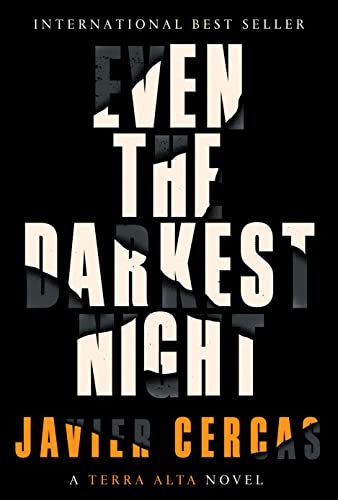 “Cercas has molded this police procedural into a fine literary novel.”

"Even the darkest night will end and the sun will rise."
—Victor Hugo, Les Misérables.

Even the Darkest Night is the story of a brutal crime in Terra Alta, Spain. Two old people, the Adells, a husband and wife, are cruelly murdered and tortured at their home. It turns out that Adell is the owner of the largest business and employer in the area so the crime is very high profile. Although the investigation of the crime is an intriguing procedural, the richer story is of Melchor, the detective involved in the investigation who eventually becomes fixated on the crime. The investigation runs in present tense, and Melchor’s backstory in past tense, in alternating chapters.

Melchor’s mother was a prostitute in Barcelona, and he has no idea who his father was. He grew up in that environment and then became mixed up in the drug business. He was eventually caught and sent to prison, but his mother somehow found him a lawyer, Domingo Vivales, who kept in touch with him and became a father figure.

In prison he discovers novels under the guidance of another prisoner, “the Frenchman” whose job is to look after the prison library. The first book he reads is Les Misérables.

“The same morning he began to read the novel. He did so with an utter lack of conviction, but, influenced by the Frenchman’s comment, he also did so as if it wasn’t him reading the novel but the novel that was reading him, and after a hundred pages, when he got to the episode when Jean Valjean was wandering through the city in search of shelter, which no one would offer him, having recently left prison hungry, stiff with cold, exhausted and ragged, Melchor noticed that tears were spilling down his cheeks. Confused, not knowing what was happening to him, he stopped reading and dried them. Then he went on reading . . .”

Melchor is enthralled by the experience, and asks for more books by that author or books like it, but is told there are none. Initially, he is overcome with sympathy for Valjean, but he is intrigued by the rigid principles and commitment of Javert. When he hears from Vivales that his mother has been murdered and no one has been arrested for the crime, he decides to become a policeman and follow Javert’s philosophy. This unlikely transformation turns out to be possible with the lawyer’s help and a bit of sleight of hand with his criminal record. He does discover other 19th century novels he loves, but Les Misérables becomes almost a fixation for him, and he reads it repeatedly.

It’s Melchor’s passion for novels that makes him an intriguing and complex character. From that point on, we want to know where this strange love affair with books will take him and how he ended up as a detective in rural Terra Alta.

Once Melchor has managed to join the police as a detective he starts his own investigation into his mother’s death. He makes no progress, but after one evening of searching for witnesses, he is well located to intercept a group of terrorists and he manages to kill them all. This makes him a hero, but also a possible target for reprisals from the terrorist cell. It’s decided that he should spend some years out of Barcelona, and this leads to his posting in Terra Alta. Not much happens there, and he has time to read. He visits the library, and meets the librarian who shares his passion for novels and in due course becomes his wife.

The case of the murder of the Adells proceeds slowly despite the plethora of resources available. There seem to be no clues and no leads, although aspects of the family, and Grau, one of the senior managers, appear suspicious. It also seems that Adell was a dangerous character. When asked about this, Grau tells a story about a general:

“When he was on his deathbed, his chaplain asked him to forgive his enemies. ‘I cannot, sir,’ the general replied. ‘I’ve killed them all.’ The manager’s croak of laughter sounds like a smoker’s terminal cough.”

Eventually the investigation is shelved.

In the second part of the book, Melchor continues his quiet life in Terra Alta with his wife and their little girl, named Cosette after the girl in Les Misérables, but he is convinced that the investigation has missed something important and continues to poke around the case. He is pressed to drop the matter, and the pressure eventually leads to horrible personal consequences. Nevertheless, he eventually receives enough help to point the way to a culprit. There is a twist at the end, which is hardly necessary for the resolution of the mystery, but critical for Melchor’s evolution as a human being.

“And, as he keeps swimming and the waves keep breaking against his body, Melchor feels immeasurable compassion for Javert, infinite pity, as if he hadn’t drowned in the Seine, but is drowning there, in that precise moment, inside him, vanishing into the water like the ghost of his absent father.”

Cercas has molded this police procedural into a fine literary novel that also brings to life the Terra Alta region of Spain.