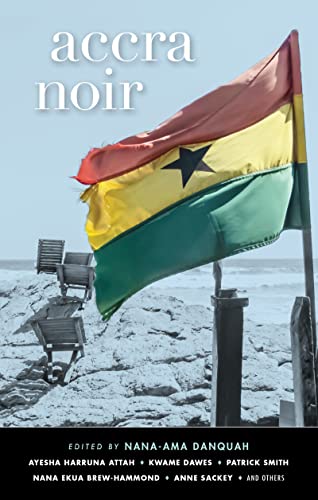 This is the latest in Akashic Books city noir series set in Africa. The 13 stories visit various locations in Accra, all of which show the poverty but hope of the people who survive there. There’s good writing as well as a strong sense of place and culture, and the reader will absorb a side of Accra that doesn’t make it into the tourist brochures.

Editor Nana-Ama Danquah tells us that Accra is the perfect city for noir stories. As she puts it in her introduction: “Accra is a city of storytellers, people who speak and live and love in parables and aphorisms and proverbs. Sprawled on the back windows of taxis and trotros—the minivans that are used for unregulated public transportation—are sayings such as ‘cry your own cry,’ ‘every day for thief, one day for master,’ ‘jealousy will kill you,’ ‘haste not in life,’ and so on.” Each saying is an incipient story in its own right, and some make it into this intriguing collection. Nana-Ama Danquah’s own story “When a Man Loves a Woman” is a different take on “jealously will kill you.”

The stories are dark; if 13 is an unlucky number, it is usually unlucky for the protagonist. Still, there are flashes of noir humor, such as in Nana Ekua Brew-Hammond’s “Chop Money.” Here, an impoverished porter at a street market by mistake kills a policeman who is paying her for sex. Things look bleak for her, but she manages to turn the tables in a clever way with a neat final twist.

Unfortunately, a few of the writers seem to feel that a noir short story must end with a twist no matter how contrived, which is a pity. Often the best twist is that there isn’t one. The author tells us that the beginning and the end were inevitable, and that it is the reader, not the writer, who needs to change that.

Eibhlín Ní Chléirigh’s brilliant story “The Boy Who Wasn’t There” does just that. Not only does she submerge us in the location and the way the poor inhabitants of East Legion support and understand one another, but she shows us the meaning of the life they lead. Their home is: “A space dominated by wires and metal that brings electricity to the Accra metropolis, dotted between which are kiosks and flimsy lean-tos raised on blocks to protect against sudden rain or unwelcome creatures. No one is supposed to live under the pylons, but in a city where officials see prohibitions as income-generating opportunities, many do.” When a boy’s body is found casually discarded at their rubbish dump, there are far more problems than just who the murderer is. Eibhlín Ní Chléirigh is originally from Ireland, but came to Africa many years ago and settled in Ghana in 1994. Her two cultures’ traditions of storytelling mix comfortably in “The Boy Who Wasn’t There.”

There are other memorable stories. Gbontwi Anyetei’s “Tabilo Wuɔfɔ” concerns a most unusual assassin or soldier or . . . ? Or what about a woman who marries a man 40 years her senior and she didn’t marry him for his money? Ayesha Harruna Attah’s “Kweku’s House” has the closest you’ll come to a happy ending in this collection. Kwame Dawes’ “Moon Over Aburi” is a whole life in a conversation between a man and a woman, but what is each really after? There’s plenty of variety of plot and style to enjoy in Accra Noir.