The Ghost Moths: A Novel 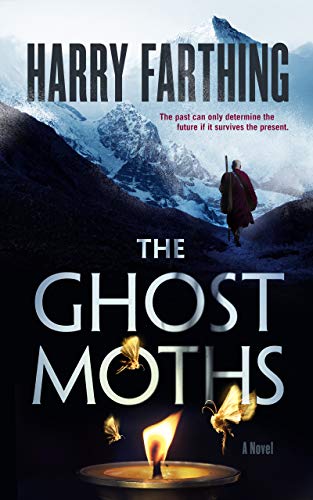 “The Ghost Moths is an adventure story set in a fascinating part of the world by an author who knows it well. The metaphysical flavor adds to the intrigue.”

The Ghost Moths is an unusual book. It’s focused on Nepal and Tibet and the legendary Himalayas between them. A strong feeling of the mountains and the people who climb them permeates the story. The author is a mountaineer himself, and his descriptions of challenging those legendary peaks has the ring of truth.

“Foot by foot, Anderson crabbed across the treacherous snow face until, finally, he could hook his axe onto an edge of solid rock and haul himself up onto it, muscles screaming. The grimace of effort split his congealed upper lip and red blood oozed out, the only warm thing in that forsaken and frozen place.”

The novel covers a broad canvass in time, ranging from the takeover of Tibet by the Chinese to the present day. It intertwines the quest story for the missing Panchen Lama, and the Dalai Lama’s struggle while exiled from his homeland. Even a hard-bitten US reporter finds herself sucked into the culture and beliefs of the region.

Each scene is an absorbing and well-written vignette in its own right. However, there are a lot of them and some could happen off stage. The result is a plethora of characters—the invaluable Cast of Characters runs to over 60—and some of them confuse the main story. It’s a great story, so let’s focus there.

The Ghost Moth is a moth of the high altitudes whose pupae are attacked by a type of fungus that destroys them, but leaves a residue that is highly prized as a traditional medicine. The story starts 40 years ago when a Tibetan youth harvesting the residue discovers an ancient and important lost relic: an intricately carved human skull. Shortly after that, the Chinese communists arrive, and it takes an uprising of the local village to recover the relic.

The Ghost Moths of the title, however, are a group of mainly foreign climbers who dedicate themselves to smuggling refugees and relics out of Tibet into neighboring Nepal. Their symbol is a drawing of the moth, and the Chinese, trying to suppress all resistance and replace the true Tibetan religious leaders by their own choices, are keen to destroy them. The Panchen Lama—who is key in the reincarnation of the Dalai Lama—is missing, and the Chinese authorities want it to stay that way. One by one, the ghost moths meet their deaths on the mountains until they are apparently all gone.

Neil Quinn is a climbing guide who is sucked into this political maelstrom when at the end of a climb, he inadvertently witnesses a massacre of local villagers. He videos it, and later sends it from his phone to his good friend Henrietta Richards, a long-time resident of Katmandu who makes it her business to validate mountaineers’ claims of summiting peaks. Soon they are both targets as a result.

Elizabeth Waterman is an American freelance journalist working on a story about the Dalai Lama and has managed to obtain an interview with him. Since he is now 80, she decides to focus on the vexed question of his next reincarnation with Tibet occupied and the Panchen Lama missing. She finds him more than up to her tough questions.

“‘We will see what happens but, for now, I am very much still here so I think, I consult, I listen, I pray. I wander places in my mind that might be forbidden to my feet to seek guidance, to understand the path ahead . . .” and later “‘One thing however of which I am certain is that an eternal faith seeks to preserve itself one way or another.’”

Her magazine is pressured into cancelling the story, but by then she has discovered another after witnessing the self-immolation of a man who turns out to be the last of the ghost moths. Before he died, he gave Henrietta Richards a string of beads and a handheld prayer wheel.

“The pair of artifacts were offered to her with the words, ‘For us all to meet on Mount Yudono you must finish what Christopher Anderson started. Neil Quinn will help you. You and he are the keys to the future.’”

They now need the skull in order to complete “what Christopher Anderson started” and only Henrietta thinks she knows where the ghost moths hid it. But she has disappeared.

The Ghost Moths is an adventure story set in a fascinating part of the world by an author who knows it well. The metaphysical flavor adds to the intrigue.