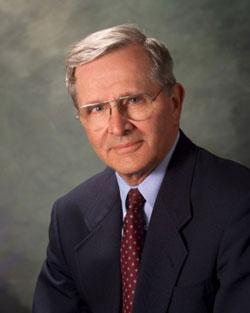 Following graduation from Aquinas College, Michael J. Deeb earned his Masters Degree from Michigan State University. The emphasis of both degree programs was American History. This was followed by 20 years of teaching at the high school, college, and university levels. During this time he earned his doctorate from Wayne State University. For the next 25 years Dr. Deeb owned an accounting and investment advisory practice.
Upon retirement from his business activities, Dr. Deeb returned to his first love, American History. His personal interest and the fact that there are literally tens of thousands of Civil War enthusiasts worldwide drew him to write of people who lived during that era. He published his first Civil War era historical novel, Duty and Honor, in 2007. The second novel in this trilogy, Duty Accomplished, was published in 2008, the third, Honor Restored, in 2009.
Dr. Deeb has sold over 1,400 of his novels during personal presentations at service clubs, libraries, bookstores, and reading clubs. He completed a two-week book tour in Michigan during July 2010. This is his seventh such tour since November of 2007.
Currently, Dr. Deeb is writing book reviews for both The Civil War News and the New York Journal of Books. He is also working on a historical novel that examines the various conspiracy theories surrounding the assassination of Abraham Lincoln.
Dr. Deeb is married to Sally Dittman and is a resident of Sun City Center, FL. They have five children and ten grandchildren.
Dr. Deeb is also an avid amateur water-colorist. He paints pictures of nature, holiday themes, and the countryside. If you’re an artist as well, feel free to share with him by emailing [email protected] to see a gallery of his paintings.

In late 1942, aviators of the 31st Fighter Group arrived in England. Included were thousands of others who served in the Eighth and Ninth U.S. Army Air Forces in that embattled nation.

Jonathan Templin Ritter writes Stilwell and Mountbatten in Burma focusing on the collaboration of two extraordinary men who, “grew up an ocean apart, were thrown together by the fortunes o

Twenty-Six Seconds: A Personal History of the Zapruder Film

In this nonfiction work, the granddaughter of the late Abraham Zapruder relates the circumstances surrounding the filming of President Kennedy’s assassination on November 22, 1963, in Dallas, TX.

The Swamp Fox: How Francis Marion Saved the American Revolution

“a captivating and long overlooked study of a little known chapter in the American Revolution.”

The Gospel of Simon

During the winter of 1996, the author was living in Alaska when he was inspired one night to write this story. Discouraged by some he hesitated to do so.

City of Sedition: The History of New York City During the Civil War

The author might have led the reader to think of New York City as chock full of sedition during the Civil War. It may have had more than its share.

Northern Armageddon: The Battle of the Plains of Abraham and the Making of the American Revolution [Review I]

Can it be true? Could a 1760 battle fought on the Plains of Abraham near Quebec City in Canada have had something to do with the American Revolution?

The notion that a war could be fought without casualties was shattered in the spring of 1861 before the first battle of Bull Run.

“. . . a study that belongs in every Civil War collection.”

“. . . very helpful in understanding Lincoln’s attitude as politician and as president toward race.”

Shiloh, 1862: The First Great and Terrible Battle of the Civil War

“Considering adding to your collection of Civil War books? Mr.

The Civil War in the West: Victory and Defeat from the Appalachians to the Mississippi (Littlefield History of the Civil War Era)

“In one volume, Earl Hess has given readers as complete a study as can be found of this theater of battle.

1494: How a Family Feud in Medieval Spain Divided the World in Half

“Anyone who wishes to thoroughly understand the development of today’s geopolitical world must read Mr.

The Battle of the Crater: A Novel

“The Battle of the Crater is a fascinating and engrossing read for any Civil War enthusiast—fiction and nonfiction lovers alike.”

Conquered Into Liberty: Two Centuries of Battles Along the Great Warpath that Made the American Way of War

“Conquered into Liberty has a valued place in the library of anyone who wishes to understand the development of the United States and its approach to war.”

“What an inspiring story; and so well told. I could not put it down, despite knowing the ending.

The Whites of Their Eyes: Bunker Hill, the First American Army, and the Emergence of George Washington

In his study, The Whites of Their Eyes, Paul Lockhart reminds the reader that aside from being the first “honest-to-goodness battle” of The Revolutionary War, the battle of Bunker Hill had

The Civil War: The First Year Told by Those Who Lived It

In this first of four volumes, the editors present a chorus of contemporary voices to give the reader an unusual portrait of the Civil War.

Annette Gordon-Reed sets the tone for her study of Andrew Johnson, 17th president of the United States in her introductory remarks:

Historians Holzer and Symonds have given both Civil War historians and Civil War enthusiasts a groundbreaking presentation in The Complete Civil War: 1861–1865. These editors present the w

The Last Stand: Custer, Sitting Bull, and the Battle of the Little Bighorn

The Grand Design: Strategy and the U.S. Civil War

Mr. Mortimer has brought to the study of the American Civil War the biography of Pryce Lewis.

The Fort: A Novel of the Revolutionary War

In the historical novel, The Fort, Bernard Cornwall brings the reader another tale of the American Revolution.

In March 1861, Abraham Lincoln was sworn in as president. Seven states of that union had left in anticipation of his inauguration. Several additional states would follow.

The Battles of New Hope Church

Under the command of General Joe Johnston, the Army of Tennessee blocked Union General Sherman’s invasion of Georgia and his move toward Atlanta.

Redemption Falls is part two of Joseph O’Connor’s Irish American trilogy. It is a fictional post-Civil War tale set in the west, most likely Montana.

Reluctant Rebels: The Confederates Who Joined the Army after 1861 (Civil War America)

Immediately after Fort Sumter surrendered, the author tells us of the tremendous enthusiasm for war in both the North and the South.

Lincoln and McClellan: The Troubled Partnership between a President and His General

Waugh’s Lincoln and McClellan promised to be a study of their relationship that broke new ground.

For All the Tea in China: How England Stole the World's Favorite Drink and Changed History by Sarah Rose (2011-02-22)

Sara Rose begins her story For All the Tea in China, this way: “There was a time when maps of the world were redrawn in the name of plants, when two empires, Britain and China, went to war

Encampment: A Novel of Race and Reconciliation

July 1913 was the 50th anniversary of the Battle of Gettysburg. Fifty-four thousand white veterans from both sides of the battle met in what was called the Encampment.

Mr. Mortimer has brought to the study of the American Civil War the biography of Pryce Lewis.

Blue-Eyed Devil is the fourth novel in Robert Parker’s Cole/Hitch series. Virgil Cole and his sidekick Everett Hitch have returned to the small, dusty town of Appaloosa.

All Other Nights: A Novel

Dara Horn has written a novel set in the Civil War. We are given a view of the Jewish community of that time through well-developed characters who are pulled and pushed by the conflict.

After the War: The Lives and Images of Major Civil War Figures After the Shooting Stopped

Those of us who grew up in the age of early television sometimes wonder whatever happened to this or that character.