1494: How a Family Feud in Medieval Spain Divided the World in Half 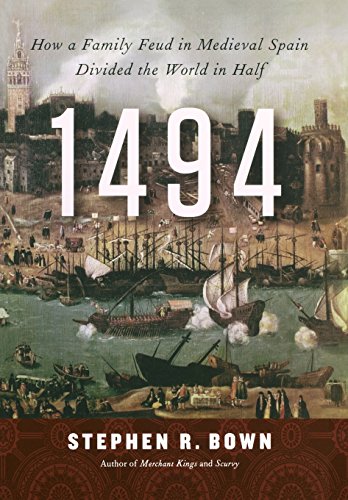 “Anyone who wishes to thoroughly understand the development of today’s geopolitical world must read Mr. Bown’s 1494: How a Family Feud in Medieval Spain Divided the World in Half.”

In fifteenth century Europe, Catholicism was the only religion recognized by the secular governments of the day. Thus, pronouncements by the Pontiff of the Catholic Church carried much weight.

Also, at this time, Portugal was the leading maritime power in Europe dominating the trade with Africa. Its control of this trade began with the conquest of the Moorish fortress of Ceuta in Northern Morocco in 1415. The discovery there of immense stores of precious metals and exotic goods spurred the Portuguese maritime explorations on the western coast and interior of Africa.

Its monopoly of this trade was given Portugal by the Pontiff of the Catholic Church. It helped that there was no other European power in position to challenge Portugal. Until that is, its new Iberian Peninsula neighbors, the kingdoms of Castile and Aragon joined to form the kingdom of Spain.

After much intrigue and military intervention in the 1480s, the King of Portugal failed to prevent the successful uniting of the kingdoms of Castile and Aragon into the single kingdom of Spain. As chance would have it, an exploration proposal from an unknown navigator, Christopher Columbus, was rejected by the King of Portugal. Instead, it was sponsored by the king and queen of the newly created Iberian kingdom of Spain.

The discoveries made by Columbus ignited a dispute between Portugal and Spain. Portugal claimed ownership of all the discoveries claimed by Columbus based on the principal of First Discovery and previous Papal declarations. At this point, the politics of the times came into play. Isabella and Ferdinand of Spain had courted the new Pope when he was a powerful official in the Vatican. They gave him and his children valuable lands and honors. He, in turn, protected their secret marriage from challenge. And, later, after he became Pope, he sided with Spain in the dispute over which country should control the new lands discovered by Columbus.

It did not hurt that the Vatican state was threatened at the time by the military forces of the French king and that the Spanish crown used its army to defend the Papal States. So, Pope Alexander VI issued a series of decisions (Papal Bulls) giving Spain complete control of all the new lands west of a line of demarcation stretching from Antarctic pole to the Artic pole.

The Portuguese King Joao II was not satisfied with the Pope’s decision and was hesitant to use his powerful navy to enforce his claims. After all, there was no appeal of a Papal decision and he did not want to be excommunicated for opposing the pontiff of the Catholic Church. So he agreed to negotiate with Spain. The result was the Treaty of Tordesillas that moved the line of demarcation east.

The treaty was given Papal sanction 1506—therefore, any violation would be punished by papal excommunication.

As the century progressed, however, English, Dutch, and French smugglers violated the terms of the treaty and the papal decisions giving Portugal and Spain a monopoly in Africa and New Spain. The power of the Pope was diminishing even before the Reformation. Excommunication as a penalty for ignoring the Pope’s Line of Demarcation was no longer a threat that mattered to many after Martin Luther’s rebellion.

After Luther, little attention was paid to decades old agreements or the opinions of the Pope. In fact, competition was sanctioned and encouraged by the new non-Catholic governments of these growing European powers. This resulted in a century of religious wars fought in Europe that spread into the newly discovered lands. The underlying driving force of such wars and preventing religious reconciliation was the search for power and wealth through the development of colonies and mercantile control in the lands of the new world discovered by Columbus and reserved for Spain and Portugal by the Pope.

Religious reconciliation meant recognizing the past and future authority of the Pope’s decisions in the matter of trade monopoly.

Mr. Bown contends, “It is hard to conceive of another political decision that has had as great an impact on the makeup of today’s world as Pope Alexander VI’s bulls and the Treaty of Tordesillas.”

Anyone who wishes to thoroughly understand the development of today’s geopolitical world must read Mr. Bown’s 1494: How a Family Feud in Medieval Spain Divided the World in Half.