Encampment: A Novel of Race and Reconciliation 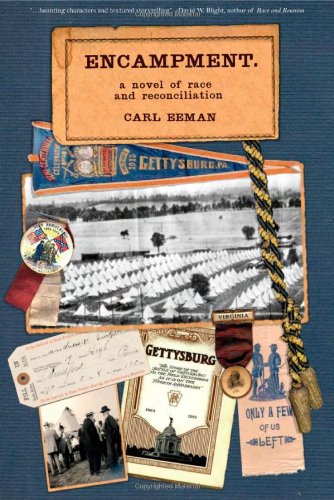 July 1913 was the 50th anniversary of the Battle of Gettysburg. Fifty-four thousand white veterans from both sides of the battle met in what was called the Encampment.

The gathering was publicized across the nation as a gesture of reconciliation between North and South. Virtually 100,000 civilians visited the site daily and attended the various ceremonies alongside the veterans.

But not all Union soldiers were welcomed. While Congress funded the reunion with a million-dollar appropriation, President Wilson’s Secretary of the Army issued an order making it very clear that colored Union veterans would not be welcomed.

Not everyone agreed with this decision, however. In this historical novel, our author, Carl Eeman tells us of a different reunion; one in which Union veterans of colored units did attend. He first reminds us that race relations had not changed all that much in Savannah, Georgia, or Rutland, Vermont, since the Emancipation was proclaimed. The author allows us to see the preparations, the actual integrated reunion and the aftermath through the eyes of three men.

Former Union Major Calvin Salisbury, a retired Vermont judge addresses his comrades of the Rutland Grand Army of the Republic: “Our national shame was preaching and denying liberty at the same time.” He reminded them. Then he led an effort to include colored Union veterans. He even met with the governor of his state. He thanked the governor for the financial assistance the Vermont legislators committed to the event: “The bill passed unanimously. The appropriation makes sure all of you (veterans) will be going.”

Salisbury replied, “But it is doubtful if any of Vermont’s 150 colored troops will be welcomed in Tent City, Governor.”

“Then, I guess it’s time for us to pick up the torch. What do you suggest, Judge?”

And so, a groundswell of support in the North grew. Fundraising by members of GAR posts and Negro churches all over the nation raised funds to support an integrated encampment.

In Savannah, Georgia, we meet a veteran of the Georgia 8th Confederate Army of Northern Virginia, Zacharia Hampton. He lives with his daughter, Emily and his son-in-law, Lee. She wasn’t very understanding of her father’s United Confederate Veteran organization: “Every month there’s some bourbon-splashed regimental something.”

It was fifty years since Zacharia had been at Gettysburg. On occasion his arm still ached from the wound he received there. And he could still almost hear the noise of battle, taste the gunpowder and smell the gun smoke. Nevertheless, he looked forward to this all-white reunion of those who fought there.

Lucius Robinson of Savannah had a different goal. He had served as a First Sergeant in the 2nd Carolina Union Volunteers, an all-colored unit. He had been denied the opportunity to march in the Washington, D.C., Grand Parade in 1865. He did not want to miss the encampment celebrating the fiftieth anniversary of the Battle of Gettysburg. He was determined to attend.

Contributors from all over the nation made the trip possible. Tents, cots, blankets, and other gear came from Northern National Guard units. Camp Lincoln was established on donated ground in Gettysburg for the colored veterans of the War Between the States.

During the week of the Encampment it is estimated that at least 100,000 civilians joined the 54,000 white veterans each day. Mr. Eeman’s novel adds to that number 7,000 colored men, veterans of the Union Army.

It was during the week of the reunion that these three veterans met one evening, and unexpectedly bonded. And so did the thousands of visitors who joined them, both blue and gray, white and colored, in reconciliation and celebration.

The author has created a believable and fascinating tale with well-developed characters. This reviewer recommends Mr. Eeman’s novel Encampment as a good read to all Civil War enthusiasts who want to take a look at what might have been.