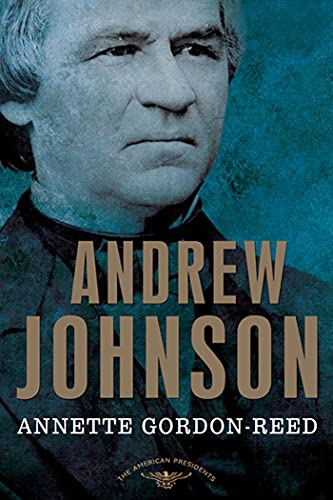 Annette Gordon-Reed sets the tone for her study of Andrew Johnson, 17th president of the United States in her introductory remarks:

“Throughout the entirety of his political career Andrew Johnson did everything he could to make sure blacks would never become equal citizens in the United States of America.”

The remainder of this study is devoted to prove this conclusion. In overly long sentences the author examines Johnson’s roots. Beginning with “We can never know for certain,” the author describes in detail the psychological driving force behind Johnson’s actions as Congressman, Governor, U.S. Senator, and President.

It is certainly true that Johnson was a politician in a slave holding state. As such, the positions he took and the votes he cast were in support of the maintenance and expansion of slavery in the United States. Despite this constancy, he was considered a maverick within both the Whig and Democratic parties. When secession came, he was the only U.S. Senator from a slave state who remained in the Senate and loyal to the Union. He was then stripped of his position, lost his personal possessions and had his family held virtually prisoner in eastern Tennessee.

Early in the war, Lincoln appointed Johnson as military governor of Tennessee. During his tenure, Governor Johnson was considered a hard line Unionist. So, when Lincoln was challenged within his own party in 1864, he chose Johnson, a boarder state Unionist as his running mate on the National Union Party ticket. Successfully elected, the congressional radicals looked forward to working with Johnson, after Lincoln’s assassination.

But Johnson reversed himself and revealed that he shared Lincoln’s belief that the Southern states had never actually legally left the Union. Thus, Reconstruction was under the direction of the executive branch of the government, not the Congress and the Senate. So, during the recess of 1865, Johnson moved swiftly to restore the Confederate states to full participation in the Union. With this action, Johnson set the stage for a clash with the legislative branch over the separation of powers. That struggle would begin in December of 1865 with the refusal to seat delegations from the “reconstructed” Southern states.

Ms. Reed recognized the dynamics of this situation and insists that Johnson used the power of the presidency to protect the right of white people and suppress those of the new freedmen. So, it would seem that a president who supported federalism vs. state’s rights in 1860 reversed his position in order to insure white supremacy in 1865. She tells the reader, “Though he remained loyal to the Union, President Johnson was a white southerner to the core.”

The author considers President Andrew Johnson a racist. Certainly by modern standards, he was. He is clearly seen to say that the Negro race is inferior to the Caucasian. What the reader will not hear from Ms. Reed is that most politicians of his time believed in white supremacy, too. She also insists that Johnson missed opportunities to work out the Reconstruction differences between the administration and congress; and that a man of stronger character would have reached out to the Radicals. But she decides that his racism prevented him from doing so.

Ms. Gordon-Reed’s study is nonetheless a fascinating look into a very difficult postwar time for the leaders of the United States. We are given a small glimpse into the monumental power struggle that followed the Civil War and the assassination of Abraham Lincoln. It is well worth the time to read.