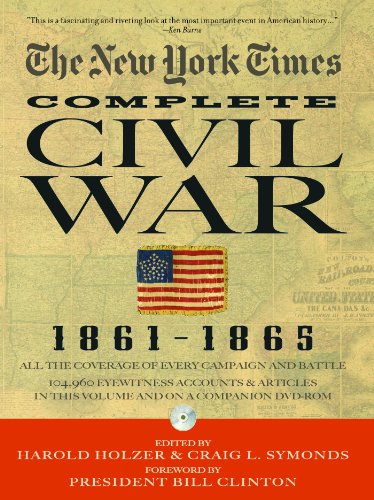 Historians Holzer and Symonds have given both Civil War historians and Civil War enthusiasts a groundbreaking presentation in The Complete Civil War: 1861–1865. These editors present the war and issues of the day through the pages of the New York Times. They do so by means of a DVD in addition to 480 pages of text.

We are accustomed to historians using newspaper editorials and newspaper stories of the period as source material to support their narratives. Holzer and Symonds compiled the editorials and the dispatches filed by field reporters of the New York Times to serve as the entire narrative.

Then they used editorials from the pre-war Times editions to walk us through the election cycle of 1860. We are told of behind the scenes activity at the conventions of both the political parties as they met during the summer to select presidential candidates.

We also read the Times’s analysis of the various candidates and the forces that played an important role at each convention. We are led to understand how and why the Republicans picked a free soil candidate to avoid nominating an outright abolitionist.

The editors move on to the campaign and we read, probably for the first time anywhere since, editorial commentary and analyses of the positions espoused by the four candidates. We thus better understand how a northern regional candidate, the Republican Abraham Lincoln, could win a national election without one electoral vote in the South.

Using editorials from the Times, again and again, the editors go beyond telling what happened to revealing why it happened and the impact the occurrence was likely to have. Secession, the major army battles in the various theatres, the slavery issue and emancipation, reconstruction, and the death of Lincoln are all treated in great detail through the dispatches of the paper’s field reporters and editorials.

The Times might have had an advantage over its competition. President Lincoln was favorably disposed toward the pro-administration editor and his paper. Early in the war, the reporters from that paper were given press credentials when reporters representing other papers were not. This special relationship was further revealed when the Times editor Henry Raymond became chairman of the Republican National Committee to prepare for Lincoln’s re-election in 1864.

This might explain the rich detail contained in the dispatches from the various fields of battle and the insights into administration policy and support for them, so clearly expressed in editorials.

Whatever the people of the Times gained from this special relationship, the editors Holzer and Symonds use it to present such a clear and unique history of the Civil War period that it deserves inclusion in every American History library: that of the enthusiast and the historian.