For All the Tea in China: How England Stole the World's Favorite Drink and Changed History by Sarah Rose (2011-02-22) 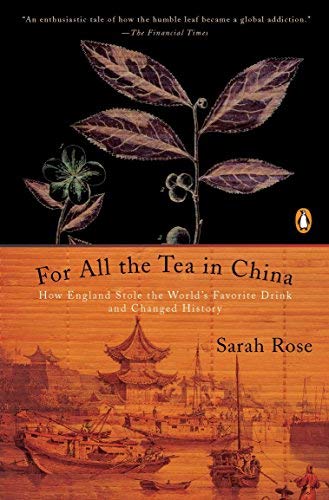 Sara Rose begins her story For All the Tea in China, this way: “There was a time when maps of the world were redrawn in the name of plants, when two empires, Britain and China, went to war over two flowers: the poppy and the camellia.” Could this actually have been the case? Were tea and opium of such great importance? Let us examine her case.

Centuries past, England’s Queen Elizabeth gave the East India Company a monopoly of all British trade in the Far East. That included the control of India and all things produced there, such as opium. For two hundred years thereafter the Company exported this addictive product from India to China. The Chinese, who had an almost complete monopoly on the production and processing of tea, exchanged this mild stimulant for the addictive opium: so history records.

Our author stresses the importance of this trade to the British Empire. She tells us that it made the East India Tea Company immensely wealthy and by extension supported the essential activities of the British government through the taxes paid on the tea trade. So when the Chinese took steps to stop the sale of the addictive opium to its citizens and closed the port of Canton to the India Tea Company, the British reacted with violence.

History records and Ms. Rose reports that the British navy was sent to keep the opium-for-tea trade open. In fact, the treaty that ended the short Opium War not only restored the trade in Canton, but also expanded it to five additional Chinese ports. Another result of the war, we are told, was that the Chinese felt shammed and they resented the intrusion as addiction to opium spread rapidly throughout their Empire.

Aware of the fragile situation, the directors of the India Company worried that the Chinese might once again prohibit the sale of opium in their country. That would upset the trade for tea and probably destroy the East India Tea Company. Therefore, since it appeared the Himalayan mountain area of India was suitable for growing the camellia flower, the Company’s directors decided it might be a wise business move to create a source of tea they would completely control: one in India.

In fact, tea had been successfully grown in India. But it paled in comparison to the varieties of tea grown, picked, and processed in China. Chinese tea was still the most sought after by consumers, and thus the most valuable for the Company’s Far East trade monopoly and their financial bottom line.

However, to grow strains of tea in India that could compete with Chinese tea was easier said than done. There were two major impediments. First, the Company’s botanists did not have the seeds nor the flowering plants to produce the right kind of leaves. In addition, they did not have personnel with the expertise to grow, pick, and process these leaves for the demanding palates of the world’s sophisticated tea drinkers.

So the Company hired an English botanist named Robert Fortune. He had gained a good deal of notoriety as a China traveler and an expert on Chinese plant life. He agreed to travel there and gather seeds and plants for the purpose of establishing a tea industry in India to rival the one that existed in China.

From this point on, we read of this effort through the eyes of Mr. Fortune, his letters and journals. The author blends his reported experiences with historical fact in an entertaining way and clearly leads the reader from each problem he faced through each solution he devised.

For All the Tea in China is a fascinating tale. Ms. Rose fulfilled her opening pledge to show her readers how the relationship of two nations was seriously affected by two plants. And she created a good read for anyone who wishes to better understand one element that contributed to the building and destruction of empires. This is a well written and entertaining read.

Dr. Michael J. Deeb owned an accounting and financial planning firm for 25 years. He is a frequent contributor to the New York Journal of Books.