Lincoln and McClellan: The Troubled Partnership between a President and His General 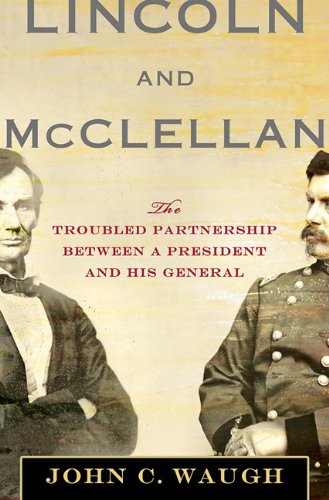 Waugh’s Lincoln and McClellan promised to be a study of their relationship that broke new ground. By extensively using McClellan’s letters to his wife Nelly, it accomplished what it set out to do.

The reader is also treated to a glimpse of the two men working together before the war. In 1857, McClellan was Vice President of the Illinois Central RR, and Abraham Lincoln was the line’s attorney. It might be said that Lincoln the lawyer, in fact, worked for McClellan.

“I have been with (Lincoln) in out-of-the way county
seats where some important case was being tried, and
in the lack of sleeping accommodations, have spent the
night in front of a stove listening to the unceasing flow of
anecdotes from his lips.”
—George McClellan

And thus, the young vice president of the Illinois Central formed his opinion of the line’s lawyer. He came to believe Lincoln to be an attorney quite able to represent the railroad’s interests in rough backwoods courtrooms. But, the author tells us, McClellan formed another opinion of his railroad’s lawyer, too. He believed Lincoln to be his intellectual and social inferior. As he told his wife Nelly, Lincoln is “an idiot.”

It should come as no surprise to the reader then, when McClellan supported Stephen Douglas in the famous debates with Lincoln, even giving the incumbent Senator a plush railroad car to use. As history would prove, Lincoln would eventually defeat Douglas in the presidential elections of 1860, precipitating secession and eventually civil war.

The author skillfully leads the reader to that time early in the conflict when the Union Army in the East was defeated and in utter chaos, leaving Washington vulnerable and the outcome of the war in doubt. The new president and his stunned government looked west, to a recently successful young general from Ohio. Lincoln asked that man to come east and rebuild the Union’s shattered army.

Upon accepting the invitation, the new general wrote to his wife Nelly, “Who would have thought . . . that I would so soon be called upon to save my country?”

As fate would have it, President Lincoln had turned to George McClellan, formerly his superior at the Illinois Central RR, as the man to lead the Union forces in the effort to crush and end the rebellion.

Cheers from all sides—the press, the troops, and the Congress—greeted McClellan’s arrival in Washington. He wrote to his wife: “Presdt, Cabinet, Genl Scott and all deferring to me—by some strange operation of magic I seem to have become the power of the land.”

His early assessment of the situation was that he had inherited a mob, that Washington was endangered, and the war virtually lost. Nevertheless, he confided to Nelly, “I am sure that I can remedy these & I am confident that I can lead these armies of men to victory once more.”

And thus, the author begins to describe the second relationship between McClellan and Abraham Lincoln. We are prepared for the worst as the new general writes his wife that his new commander-in-chief is, “nothing more than a well-meaning baboon.”

Through McClellan’s letters we are brought to understand his real character. Acknowledged by all, including Lincoln, as a most able organizer, his arrogance and distrust of authority made him difficult in the extreme to work with. These flaws of character, the author contends, doomed any effort Lincoln and others in his government made to work with this general.

McClellan told Nelly that he despaired of working with those rascals in Washington. “I can’t tell you how disgusted I am becoming with these wretched politicians—they are the most despicable set of men . . .”

So, shortly after the September 1862 battle of Antietam, Lincoln relieved McClellan of that burden.

A year later, as the presidential election of 1864 approached, the author paints a clear picture of the public mood in the North and the political landscape there. It is fascinating to read how political circumstances brought Lincoln and McClellan together once again: this time as political opponents.

This short study goes beyond just the Lincoln-McClellan relationship. In fact it is principally about how McClellan handled the great authority given him by President Lincoln in 1861. The author brings to the table a better understanding of how McClellan’s rigid arrogance, mistrust, and fear of failure impeded his ability to work with civilian authority and subordinates or lead his troops effectively. It is well worth the read.