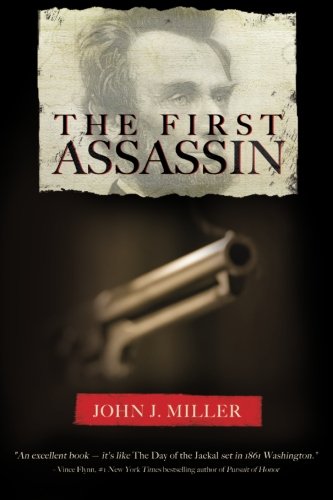 In March 1861, Abraham Lincoln was sworn in as president. Seven states of that union had left in anticipation of his inauguration. Several additional states would follow. Lincoln’s capital was located in secessionist leaning Maryland. In fear for his life, the president-elect had to sneak into Washington, D. C., to take office. It is no wonder that there were plots aplenty discussed in the city’s bars, bedchambers, and offices.

John J. Miller’s The First Assassin is a well-written novel of that time and place. It is a fast paced thriller bringing the reader into Washington, D.C., of the spring of 1861 and into the heads of both assassins and protectors of the president. Colonel Charles Rook is determined to protect the new president. He risks his career in the lonely belief that post-Sumter Washington is still full of pro Confederates and is thus a dangerous place for a president who seems contemptuous of the dangers swirling about him. This is especially true when loyalties are in doubt.  Despite repeated orders to the contrary, Rook has his small crew spy on people he suspects of secessionist sympathies. Popular and influential Washington socialite Violet Grainer was chief among them. Meanwhile, a South Carolina plantation owner, Langston Bennett, hired a Cuban assassin to kill Abraham Lincoln. Bennett’s long time personal slave, Lucius, held the belief current among many Negroes, that Lincoln was destined to free all slaves. So he gave the assassin’s photo to his young granddaughter and ordered her to escape the plantation to warn Lincoln, himself, in Washington. Back in Washington, Colonel Rook unwittingly discovers the assassin through his surveillance of Violet Grenier, who is a friend of Langston Bennett. Meanwhile, against enormous odds, the runaway slave girl, Portia, evades the dogs of her pursuers and finds her way to the Washington presidential offices and a late night chance meeting with Abraham Lincoln himself. As a result, the safety of the president becomes a priority along with the defense of the city. Colonel Rook’s fears and suspicions were justified. These and other separate story threads are skillfully brought together in Miller’s page-turning thriller. A believable story set at a tumultuous time will captivate the historical fiction fan and interest the hard-core Civil War enthusiast.