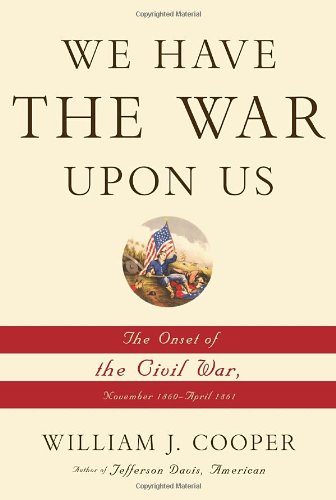 “. . . a study that belongs in every Civil War collection.”

Most every student of the Civil War knows that the firing on Fort Sumter ignited the war between the Confederate States of America and the United States of America. Some even know that attempts were made by leaders of both North and South to defuse the secession crisis of 1860–1861. Few know the details. We all know that a war between the Union and the Confederacy began in April 1861.

Dr. Cooper’s work, We Have War Upon Us, gives every Civil War era enthusiast a clear picture of the reunification efforts and why they failed.

The fire-eaters of the South reacted to the election of America’s first sectional president in a predictable manner: They urged all the slave states to leave the Union. Dr. Cooper calls these secessionists Immediatists. One of these, Sen. Robert Toombs of Georgia said, “Nothing but ruin will follow delay.”

Other Southern leaders, however suggested a wait and see stance. They were called Cooperationists. One of these was Alexander Stephens the future Vice President of the Confederate States. He reminded his fellow southerners that Democrats in the United States Senate still could block any onerous legislation passed in the Republican dominated House of Representatives; that the Supreme Court was still dominated by pro southern men; and that Lincoln would most likely be a one term president once the Democratic party became a unified national party again most probably by the next presidential election. He therefore predicted that Lincoln would be a one term, weak president at best.

Nevertheless, in December 1860, the fire-eaters of South Carolina voted to secede from the Union. Delegates to secession conventions led six other slave states out of the Union in January and February of 1861. Upper South and the Border states were less passionate to secede.

By substantial majorities Cooperationists dominated the secession conventions held in these states. Delegates voted to remain in the Union for the time being. They would wait and see what this new Republican administration had in store for them and the nation.

This secession crisis initiated a rush to placate Southerners fears. In the second session of the 36th Congress that began in December 1860, committees were formed: The Committee of Thirteen in the Senate and of Thirty Nine in the House. They were formed to consider what Congress could do to address the secession crisis and make recommendations to the House and Senate.

Meanwhile, Lincoln was urged to assure the people of the country and of the South in particular of his intentions. He refused, insisting that whoever wished to could read his past statements.

But to those deliberating in Washington, he urged Republican officials to stand firm; there would be no compromise on the territories. He stood by the Republican Chicago Platform and would not compromise it. His Secretary of State designate, Senator Seward could speak for him in Washington.

There, the Republican Senators and members of the House of Representatives greeted every single proposal with debate, delay or outright nay votes. Rather than trying to lure the seceded states back with compromise, in the US Senate, Republicans took advantage of the absence of 13 Senators from the seceded states and passed the Morrill Tariff doubling the tariffs charged on many imports.

Senators from the South had opposed tariff increases since 1846. So this step only reinforced the fears of the South: What would come next? The newly formed Confederate government passed its own lower tariff modeled on that of the 1846 U.S. tariff.

Lincoln’s first Inaugural Address did nothing to calm the situation. He insisted that the Union was perpetual and that secession was a violation of that compact. He did not recognize the existence of the Confederate States of America. While he promised not to use force to reunite the country or retake federal property, he pledged to protect property still held and to collect federal tariffs.

March 1861 proved to be a time of last attempts at settlement. The new Secretary of State, Seward met with Confederate Commissioners without accepting their credentials. He walked a thin line between the Commissioners and Lincoln’s lack of a Southern Policy. Lincoln’s predecessor had left unanswered the disposition of four forts still held in land claimed by the new Confederacy. What to do? Surrender them as a majority of Lincoln’s cabinet and Lincoln’s military advisors suggested in early March or re-supply them as a majority decided in late March?

While Lincoln and his cabinet dithered, the Cooperationists in the Border states and Upper South were under pressure to join the Confederacy. They all still held a majority in their conventions but knew it would be lost if a military conflict over any of the forts began.

Dr. Cooper walks the reader through the committee meetings of the 36th Congress and the March meetings between Seward and the southern Commissioners. We can sense the tightrope he walks trying to hold the Upper South and Border States while Lincoln formed his policy.

William J. Cooper’s work fills a gap in our understanding of why compromise failed and why war began—a study that belongs in every Civil War collection.