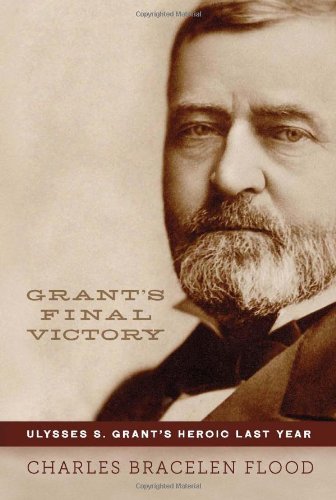 “What an inspiring story; and so well told. I could not put it down, despite knowing the ending. Anyone interested in the Civil War Era should read Grant’s Final Victory.”

When General Ulysses S. Grant and his wife Julia left the White House they were not well off financially. He had had to relinquish his military pension to accept the presidency, and that office only paid $25,000 a year. In fact, after his presidency and during a two year around the word trip, their son had to wire them funds in order for them to complete the journey.

During their trip, the crowned heads and leaders of the world welcomed the general as a conquering hero. Upon their return, he found himself equally popular among the people of the United States. People of influence and wealth also welcomed the Grant and his wife to their circle. William Vanderbilt said of him, “He is one of us.” So it was not surprising that they chose New York City for their primary residence.

Without a pension, other income, or savings, the general had to accept money from influential friends to buy a home on East 66th Street and to become a partner in an investment firm. Called Grant and Ward, the firm used the General’s reputation to attract investors. Three days a week General Grant would travel to the firm’s Wall Street offices. There he would greet friends, maintain an active correspondence with wartime comrades, and sign papers his partner, Ferdinand Ward, placed before him.

With their financial security in place the General wrote his wife Julia a note in April of 1884:

“Julia, you need not trouble to save for our children. Ward is making us all rich—them as well as ourselves.”

And so it seemed. He estimated that with his New York City home paid for and a net worth of a million dollars, they were secure.

On a Sunday in early May, Ward visited at the General’s home. He said that a financial problem would cause their firm embarrassment unless $150,000 could be raised before Monday. General Grant went to his friend William Vanderbilt. Grant returned home with a loan for that amount and turned over the funds to his partner, Ward.

But upon his arrival Tuesday at the offices of Grant and Ward, he found that the financial crisis had just begun. He was told that his company’s funds were frozen because of difficulty experienced by the Marine Bank, run by another partner in Grant and Ward, James Fish.

As the crisis deepened, it became apparent that Grant’s investment had disappeared; the partnership of Grant and Ward was bankrupt, owing almost $16 million. Even the $98,000 given to Ward by Grant to pay for their home on East 66th Street had been stolen. Grant’s personal bank accounts were frozen as well. Grant and Julia calculated that they had $210 dollars between them. Their two sons did not even have carfare.

Grant refused the kind offers of financial support from friends. It was at this point that the general reversed his frequent refusal to write of his wartime exploits. A New York magazine offered him $500 each for a series of four articles. Finding that he enjoyed the experience, he further agreed to expand his efforts to a book-length memoir covering his entire role during the Civil War.

It was at this point that General Grant was diagnosed with cancer of the tongue. It was determined that the cancer was terminal.

Mark Twain entered the picture at this point. He offered a much more lucrative arrangement if the general would sign a contract with the Twain publishing house for a two-volume wartime memoir. Grant agreed.

The race was now on. Could General Grant finish his work before the cancer ended his life? He worked several hours each day as long as his energy allowed. Twain provided him with a stenographer to speed things along. His sons and an old Army aide proofed his handwritten documents.

Eventually, word got out that he was dying. The press screamed out the information in headlines across the nation. Veterans north and south rose to support General Grant in his race to finish his memoirs.

Days after he finished the second volume he died.

What an inspiring story; and so well told. I could not put it down, despite knowing the ending. Anyone interested in the Civil War Era should read Grant’s Final Victory.