The Battles of New Hope Church 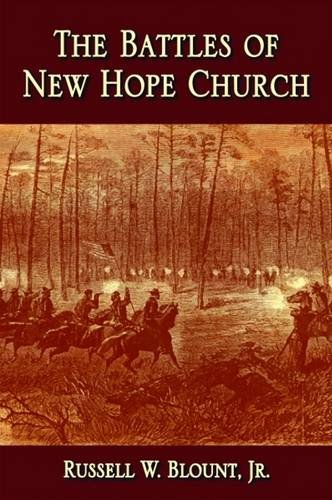 Under the command of General Joe Johnston, the Army of Tennessee blocked Union General Sherman’s invasion of Georgia and his move toward Atlanta. Russell Blount’s nonfiction work describes the series of encounters between May 25 and May 31, 1864, called the battles of New Hope Church.

In this short study, Mr. Blount gives the reader an unusual glimpse of the men who fought, among them General Sherman. Much has been written of that determined and fiery redhead. Blount builds on that profile with family information and the general’s opinions of his subordinate commanders as well. He tells us that Sherman drives his 100,000-man army with purpose, demanding obedience from top to bottom; and is most impatient with commanders who do not meet his expectations.

While Sherman enjoys the complete support of the Union army’s overall commander, General Grant, we are told that Joe Johnston and the Confederate President Davis detest one another. Davis wants generals who attack the enemy. Johnston is a cautious organizer and does not hesitate to go on the defensive. Confederate General Lee can go to trench warfare, but when Johnston sees the need to adopt that form of defensive posture, he is criticized from Richmond.

Blount tells us that Davis gave Johnston command of the Army of Tennessee in January, 1864, only because no one else was available. After the debacle of Lookout Mountain, this army was demoralized and disorganized. Johnston used that winter to reorganize it into a proud fighting force of 40,000 men. It was none too soon. For Sherman’s larger army was on its way into Georgia by mid May and headed for the rail center at Atlanta. The Army of Tennessee, half the size of Sherman’s force, was all that stood in his way.

On May 25, General John Gary and his commander, General Joe Hooker, are riding in the lead of Gary’s division. In pursuit of a few rebels, he directs his force forward. Before long the road is replaced by a trail that leads his division into a dense forest—and 4,000 rebel infantrymen, the right wing of the Army of Tennessee. Hooker hurries his corps forward and an unplanned battle in hilly terrain begins to develop. Days of rain make conditions even worse.

But Blount is not just telling a story of how generals, in this series of fights, used their troops to achieve or block military objectives. Instead, our author invites us into the very minds of the troops on both sides to describe the horrors of the battles and the aftermaths.

He also broadens our understanding of trench warfare. Called breastworks, a trench is usually dug to a depth of three-feet deep. A parapet of logs and dirt is placed in the front of the trench to establish a firing platform. Then, sharpened sticks and brush are placed well in front of that and as much as possible of the field of fire is cleared to establish a killing field. Both sides resorted to this defensive technique.

The trenches dug during these battles are described as crawling with vermin and full of water as high as the men’s ankles. Men cannot hope to escape the filth of fighting from such a position, nor can they hope to sleep in such conditions. Even standing up is dangerous because of sharpshooters. To make matters worse for the troops of both sides, everyone is short of food. The Confederate soldiers are always hungry and expect a good meal if captured; but not this time. The Yanks’ supply lines are so stretched that the Union men are on half rations and their horses are starving.

Sherman wants to disengage from the stalemate. He needs to move closer to his supply lines, and he wants to renew his drive on Atlanta. In exasperation, he takes personal charge of his forces on May 31 and moves his men out of the trenches.

To avoid being flanked, Johnson must move his force too. Instead, his superiors are pressing him to attack. He responds that he is facing far superior numbers and sees no opportunity for attacking in force at this time. His subordinate, General John Bell Hood, is telling President Davis otherwise. Johnson plans his retreat.

The Battles of New Hope Church, is well researched and an entertaining work. However, just as the author told us that the combatants often got lost in the dense forest where these battles took place, so can the reader become confused trying to follow the action. This can be avoided if the author would place a clear map at the beginning of Chapter 3 when the first of the encounters is described. Placing another map at the beginning of Chapter 14 would also enable the reader to better see the disposition of the two armies at the conclusion of the battles.