All Other Nights: A Novel 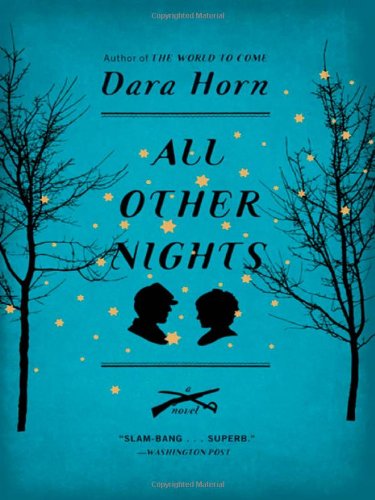 Dara Horn has written a novel set in the Civil War. We are given a view of the Jewish community of that time through well-developed characters who are pulled and pushed by the conflict.

We meet Jacob Rappaport, our protagonist, at his father’s New York City dinner table. Jacob has just reluctantly agreed to his father’s demand that he marry the addled daughter of a rival businessman in order to cement a business deal. Jacob escapes by joining the Union Army.

Jacob’s superiors pull him out of the ranks and send him on an undercover assignment to New Orleans. Posing as a Confederate soldier, he is to find his way to the home of his uncle, Harry Hyams. It appears that there was sufficient evidence to prove that Mr. Hyams was planning an attempt on the life of Abraham Lincoln. Jacob is welcomed there by his aunt and uncle.

That night Jacob joined the Hyams family as they celebrated Passover seder (the title to the book is a reference to the Four Questions posed during a Passover seder). Judah Benjamin, the Confederate government’s Secretary of State was also a guest. During the ceremony. full of doubt and self-loathing, Jacob completes his assignment. Harry Hyams dies in dramatic fashion and Jacob escapes to Union lines.

Then, despite assurances to the contrary, he is ordered to undertake another undercover assignment. This time he is to travel to New Babylon, VA. There he is to contact Philip Levy, another business associate of his father’s. Mr. Levy has four daughters, one of whom, Eugenia, is a Confederate spy. Jacob is assigned to marry her and then betray her to Union forces.

In the process of carrying out his mission, Jacob falls in love with Eugenia. He is full of self-recrimination when he not only turns her in to Union authorities, but loses his unborn child as well.

Returned to his infantry unit, Jacob is seriously burned and crippled in an explosion. After a year in recovery he still suffers from his injuries. Despite his physical limitations, Jacob convinces his military superiors to send him to Richmond, VA, as a spy. He assures them that he can obtain an office position with Judah Benjamin, still the Confederate Secretary of State.

Horn’s story comes to a surprising and dramatic conclusion as the city of Richmond virtually explodes around Jacob. This fascinating page-turner will be a welcome addition to any Civil War enthusiast’s reading list.