Northern Armageddon: The Battle of the Plains of Abraham and the Making of the American Revolution [Review I] 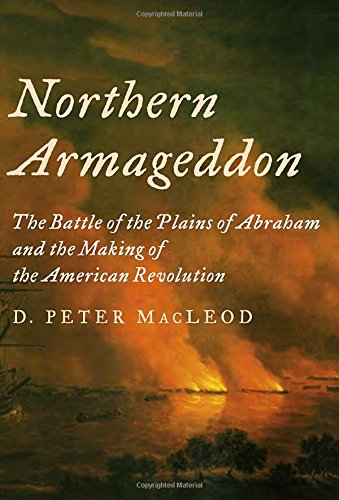 Can it be true? Could a 1760 battle fought on the Plains of Abraham near Quebec City in Canada have had something to do with the American Revolution? Peter MacLeod builds a convincing case that it did.

In 1749, a Swedish botanist who traveled the British American colonies reported, “I have been told by Englishmen that the English colonies in North America in the space of thirty or fifty years would be able to form a state by themselves entirely independent of Old England.”

A Philadelphia royal administrator, James Logan commented in 1732, “While Canada is so near they (colonists) cannot rebel.”

And James Murray, a British soldier, decided that it would be wise for the British Crown to give Canada back to the French. “If we are wise we won’t keep it. New England needs a bridle to keep it under control and we will give it one by not holding on to this (Canada) country.”

By winning the Seven Years War, the British Crown did not cause the American Revolution. But that world conflict did cause Parliament to take several steps that resulted in discord and war with the people of their American colonies.

The conflict with the French had left the British with a large debt. It had also created a need to manage a very diverse world empire. At that time, such a management system was called “Mercantilism.” This was a system whereby the colonies—English, Spanish or French—were expected to enrich the Mother Country through taxes and trade arrangements.

So imposing taxes on their American colonists to help pay off the debt incurred in removing the French from North America was considered by the British Parliament a normal obligation the colonists owed the mother country. Parliament contended, therefore, that the colonists must pay their share of the debt.

And further, Parliament believed it needed another element of control over their colonies by appointing and paying all Royal officials in their colonies. Thus their laws would be enforced and such officials would be loyal to the Crown, not a colonial legislature. This new system was to be supported by taxes imposed by Parliament and paid by the colonists in each colony.

But the British colonists viewed Parliament’s new colonial system a broad-based attack on their freedoms. And the presence of British troops in colonial America was seen as no longer necessary with the removal of the French threat in North America.

In addition, Parliament attempted to limit the westward expansion of American colonists. This was done to fulfill the promise the Crown made during the Seven Years War to their American Indian allies that their Indian lands would be respected. So Parliament’s prohibition of western migration was made in the attempt to both fulfill that promise and to make it easier to control its coastal population. The presence of British troops in colonial America to enforce these objectives was also viewed with alarm by colonials.

As such these moves were viewed by American colonists as limiting their individual freedom and therefore highly resented and opposed. Just the same, once the French were eliminated Parliament felt free to impose taxes, a mercantile system, and widespread controls. Each attempt to impose a tax, however small, was resisted by the colonists.

MacLeod does help the reader understand the massive geography of the North American continent. While doing this, he helps the same reader become aware of how difficult and expensive it had become for the French to manage such a massive territory.

It was so expensive and difficult that in the Treaty of Paris of 1763, the French government gladly gave Canada and all its claims in North America to England and Spain in exchange for some sugar plantations on the island of Guadeloupe the Caribbean and fishing rights in Newfoundland waters.

While this part of the work is comprehensive, the author spends much less time proving his central theme: that of linking the result of the Battle of the Plain of Abraham in Canada and the Treaty of Paris in 1763 to the American Revolution. But with excellent maps and illustrations, he does make it clear that once the French threat to the 13 American colonies was eliminated, the door was opened for colonial opposition to British rule.

To that extent, Mr. MacLeod brings to us in a very interesting and understandable fashion an episode of North American colonial history heretofore paid scant attention.