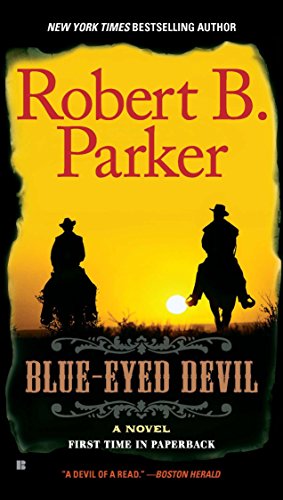 Blue-Eyed Devil is the fourth novel in Robert Parker’s Cole/Hitch series. Virgil Cole and his sidekick Everett Hitch have returned to the small, dusty town of Appaloosa. An ambitious fellow named Amos Callico has taken their former position of police chief in this isolated place. But the new police chief is selective in responding when local saloons need protection from area cowboys who drink a bit too much and overzealous customers who abuse ladies of the evening So the local businessmen greet Virgil and Everett with a proposal: “All of us got the same problem,” Speck said. “And we thought you boys might be able to help us.” It seems that the chief of police charges a monthly “safeguard fee” of each Appaloosa businessman. But, they complain, payment does not guarantee protection. In this new deal: “We get safety and you get money.” The die is cast for a confrontation. First, Chief Calico tries to run Virgil and Everett out of town. When they refuse to leave, he offers them a cut of the monthly fees he will resume collecting from the business owners who have hired the former law officers. Finally, he suggests they just stay out of each other’s way. Virgil and Everett are willing. But that understanding proves to be short lived. In a saloon one evening, the son of the rich local landowner is killed when he forces Virgil into a gunfight. Important to the police chief’s future political plans, the father of the dead man presses Chief Calico to arrest Virgil. When that does not go anywhere, he hires a famous gunfighter to kill Virgil. Not enough action yet? A band of renegade Indians attacks Appaloosa. While the police chief chases a decoy miles from town, the Indians set it ablaze. Virgil is not fooled though. He, Everett, and some friends, including the rich landowner and his hired gunslinger, fight off the Indians.   Afterward, the rancher and the chief of police join forces to successfully raise money to rebuild the town. But when the two men square off in a local election for mayor, events turn violent. As you might expect in a Parker tale, Virgil and Everett are right in the center of the conflict—as well as the surprising conclusion. The fast pace and humor of Parker’s dialogue will keep fans flying through this book. And the conclusion will make them long for the next Cole/Hitch novel. Reviewer Dr. Michael J. Deeb is the author of Duty and Honor, Duty Accomplished, and Honor Restored. He is also a retired university instructor of American history.