The Civil War: The First Year Told by Those Who Lived It 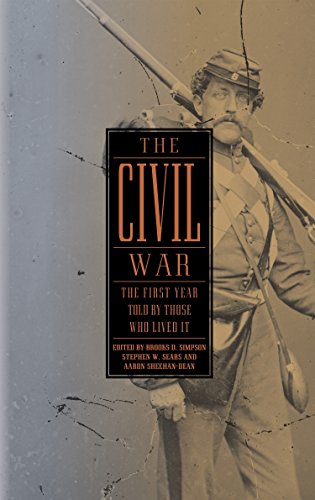 In this first of four volumes, the editors present a chorus of contemporary voices to give the reader an unusual portrait of the Civil War. For the first time, we have these words in one place from the people who lived them.

After the election of Abraham Lincoln as president of the United States, secession was the talk of the day in America. Newspaper editorials of the period analyzed the crisis. The editors of this volume have included a sampling from papers such as The Charleston Mercury, the New York Daily News, The New York Tribune, and the New York Times.

Personal letters and commentaries from a wide range of individual, north and south, provide the reader with insights not previously available to most students of the Civil War. The first 18 months of conflict are told through memoranda from Generals W. Scott, McClellan, Lee, Fremont and Grant. Their observations and opinions help clarify the difficulty of the deepening struggle.
The observations of citizens like Mary Chestnut, Kate Stone, Emma Holmes, William Russell, John Jones, and Walt Whitman are also quoted—all of them observed and commented on the scene from their perspective.

This first volume is accompanied by extensive bibliography and biographies of each of those quoted by the editors. The editors have also included their own notes as well.

One need not be a Civil War historian to find volume one of the The Civil War a valuable resource. In fact, it is highly recommended as an important addition to any personal library of the period.