After the War: The Lives and Images of Major Civil War Figures After the Shooting Stopped 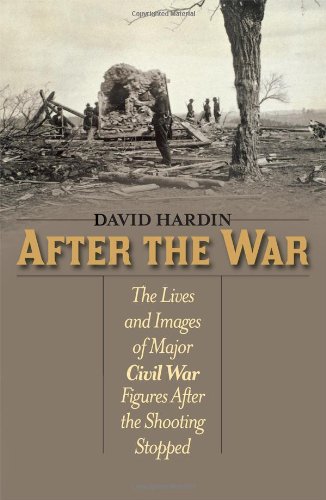 Those of us who grew up in the age of early television sometimes wonder whatever happened to this or that character. Often, a television program will feature “grown up” child actors or “older” adults who were our program favorites at one time.

But whatever happened to some of the major figures that flashed across the Civil War screen? Post-war stories of General Robert E. Lee, General Ulysses S. Grant, and Mrs. Mary Todd Lincoln are rather familiar. In addition, our author, David Harden, has favored the reader with several personalities who have not been as well known. And, herein lies the enjoyment for the reader.

An off-hand remark by General Gordon would label, some say doom, Winnie Davis as the “Daughter of the Confederacy.” And, who would become friends after their husbands passed away? Julia Grant and Varnia Davis. Libbie Custer’s campaign on behalf of her husband’s memory is well told and interesting, too.

Military figures abound in this study. Were there any well-known sons of the South who chose the Union over the Confederacy? One, not even students of the period don’t hear much about, was General George H. Thomas. He was a native Virginian who served with Lee at both West Point and in Texas. Nevertheless, he chose the Union and served with distinction, both during and after the conflict. The author reveals the frustration Thomas felt of being hated in the South and disowned by his own family as a traitor while for the same offense, mistrusted by both his Union colleagues and superiors.

No such study would be complete without some attention paid to the post war travails of Mary Todd Lincoln and Ulysses S. Grant as president. Should Mrs. Lincoln be considered mad or just eccentric? The author allows us to make our own decision. But, in Grant’s case the evidence is so compelling that his post war administration was rife with corruption, that there is little doubt: history must conclude that he was not up to the task. What did this say about the war hero who so successfully led Lincoln’s armies with such an iron fist?

The author also reveals how personal animosities carried over after the war. Sherman allowed his aversion to religion in general and the Catholic Church in particular to tear his family apart. Confederate general Joseph E. Johnson allowed his wartime feuds to remain unresolved after the conflict ended. In this same vein, we learn of the anger felt toward the North as revealed through the observations of civilian diarist, Mary Chesnut.

In After the War, Hardin presents his study of eleven Civil War era individuals. It could be argued that others of this time also deserved inclusion. But no one could say that any of these eleven should have been excluded. More than once, Hardin’s remarks at the conclusion of each study were too abrupt and could have been more complete.

Civil War buffs will find long overlooked information in Hardin’s narratives. And anyone interested in the Civil War era, will find his book, After the War, worth reading.