The Last Stand: Custer, Sitting Bull, and the Battle of the Little Bighorn 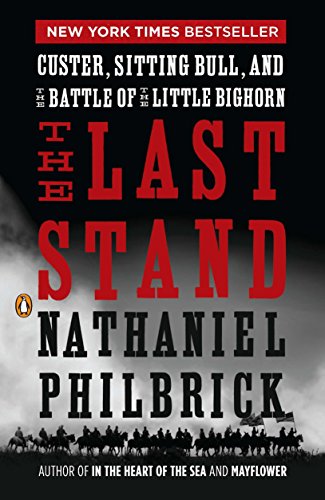 As every schoolboy knows, George Armstrong Custer and 230 men of his beloved Seventh Cavalry were massacred on June 25, 1876, by Indians led by Chief Sitting Bull at the battle of the Little Bighorn.

Much has been written of this battle and the men involved. Custer’s widow, Libby, devoted the remainder of her life to assuring her husband’s enshrinement as a hero. Buffalo Bill Cody immortalized Custer and Sitting Bull in his traveling Wild West show when he ended each performance with a reenactment of the “Last Stand.”

Nathaniel Philbrick’s complete presentation of his exhaustive research attempts to bring the reader to a clear understanding of the forces involved in this tragedy. He goes far beyond a focus on one or two of those involved. Instead, we are made to realize that the actions of Custer, Sitting Bull, and the other personalities involved were more influenced by the pressures of their time and place than by their own personalities.

He begins by reminding us that the economic reality of the times made the acquisition of gold an important priority of the Grant administration. Some of that precious metal had been found in the Black Hills by miners illegally on that Sioux land. So General Sheridan was ordered to explore the area. He sent Lieutenant Colonel Custer and the 1,000 troopers of the Seventh Cavalry on the Black Hills Expedition of 1874, with orders to find a suitable site for a fort. Instead, mineral experts included in the expedition found gold in great abundance,.

This discovery prompted the Grant administration to purchase the Black Hills from the Sioux. When Sitting Bull and the other leaders refused, the Sioux were ordered to leave their sacred ground and report to reservations by the end of January 1876, or be considered at war with the United States.

When the Sioux did not respond as directed, General Sheridan ordered the military to enforce the directive. A winter campaign did not materialize. But a three-pronged military attack was planned for the spring. Before he could lead his Seventh Cavalry as part of this effort, Custer was ordered to Washington.

While there, he lost the support of President Grant when he foolishly became embroiled in the scandals surrounding the president’s brother. He was only rescued from dismissal from the Army by the press looking for reasons to attack Grant. Custer’s problems went beyond losing command of his precious Seventh Cavalry. He also experienced financial losses in the panic of that day and faced the added public disgrace of having to declare bankruptcy.

And so it went. Custer, out of favor with his superiors, was assigned to a subordinate role in what appeared to be the last Indian war; he looked for a way to recover his image. Only by doing something spectacular during the spring campaign against the Sioux would he be able to restore his dashing reputation with the public. And, by this means, he believed, he could regain his financial standing through lectures and writing after the conflict was successfully concluded.

In this light, the pressure on Custer to become a hero with the American public can be seen and understood. But what of Sitting Bull and his Sioux nation? Against the odds they faced, what can explain their determination to resist?

It would appear that the return of buffalo had as much to do with the refusal of the people of the Sioux nation to give up the Black Hills as gold influenced Washington’s wish to buy it.

Among the Indians of the plains, Sitting Bull stood virtually alone in his opposition to the wishes of the Grant administration. The Indian leader’s resistance was reinforced by the return of a sizeable herd of buffalo to the Black Hills. The Sioux had long followed the seasonal migration of this animal. Its return was seen as a favorable sign. It seemed to signal a call to the People for a return to the old way of the Sioux nation, and to follow Sitting Bull.

With word of the buffalo’s return, Sitting Bull gained stature, and many Sioux saw no need to obey Washington and go to a reservation. Instead, they returned to the Black Hills in great numbers.

Thus, Philbrick sets the scene for a conflict as unexpected as it was violent.

And what an enjoyable read Philbrick delivers in the process. He gives us an excellent understanding of the action by providing fastidious maps and complete descriptions of the geography. With these he helps the reader easily follow the events surrounding the battle.

Not to be ignored is his treatment of the aftermath of the Big Horn battle. There, he broadens our focus and completes our understanding of the impact Custer, Sitting Bull, and the other players in this tragedy have had on the history of the United States.