Shiloh, 1862: The First Great and Terrible Battle of the Civil War 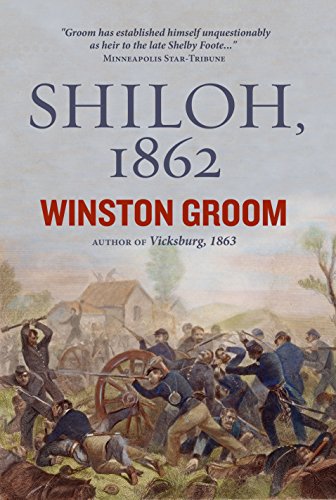 “Considering adding to your collection of Civil War books? Mr. Groom’s account, Shiloh, 1862: The First Great and Terrible Battle of the Civil War is highly recommended.”

Mr. Groom tells the story of Shiloh, the first great battle of the American Civil War. At Shiloh, over 100,000 men fought in an area less than 12 miles square and because of the terrain, control became virtually impossible so it became a fight between regiments.

There were more casualties suffered at Shiloh than in all the previous conflicts in which American had fought.

As a result, this engagement changed forever how people in both the North and the South looked at the War Between the States. Before the battle of Shiloh took place in April 1862, most everyone thought that this dispute would be settled quickly—most likely after only a few battles. After Shiloh, however, even General Grant predicted that the war would not be won until the South was completely conquered.

But the author is not content with merely describing the battle. He believes other historians have done that admirably. Instead, he first educates his readers beginning with describing the weapons available and techniques of war both sides would use. Then he reminds us of the causes of secession and war, why Southern leaders led their states out of the Union, and why the men of the South fought.

And, before Mr. Groom details the Shiloh battle, he leads the reader to understand the overall importance of gaining control of the Mississippi River. Early on, President Lincoln had identified the necessity such—and Grant saw the strategy by which that goal could be achieved.

With this foundation established, Mr. Groom uses clear and well-drawn maps as he leads us through the ebb and flow of the battle. Reading Shiloh, 1862 is almost like reading a novel. As sunset on the last day of the fighting approaches, we hold our breath, just waiting. One last push by the Confederates might just achieve victory. Will they attempt it?

Mr. Groom concludes his excellent study by telling us that the importance of Shiloh was: “It was as if, at Shiloh they had unleashed some giant, murderous thing that was going to drench the country with blood . . .”

Considering adding to your collection of Civil War books? Mr. Groom’s account, Shiloh, 1862: The First Great and Terrible Battle of the Civil War is highly recommended.