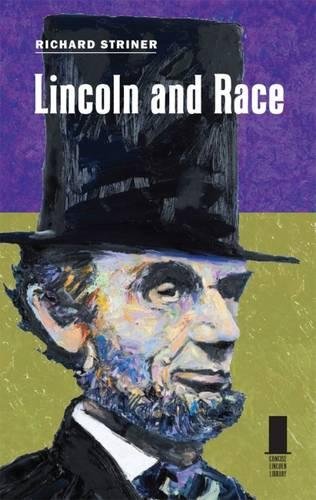 “. . . very helpful in understanding Lincoln’s attitude as politician and as president toward race.”

Richard Striner concludes that: “Lincoln was free of any gut-level bias. There was no racial malice in his soul.”

This conclusion is not easily reached, because in the process of his research, he also discovers that the office seeking-Lincoln and the moral-philosopher–Lincoln often posed irreconcilable positions on the most emotional issue of his day: racial equality.

For example, when Stephen Douglas struggled to salvage his position on popular sovereignty he used racial taunts. He said that his Republicans opponents were Negro lovers whose policies would result in race mixing.

Fellow Illinois Republican Abraham Lincoln was asked by his party leaders to respond to the Douglass attack. So on June 26, 1857, Lincoln pointed out that the Republican Party agreed with the signers of the Declaration of Independence who insisted that all men are only equals in that they were all entitled to the unalienable right to life, liberty, and the pursuit of happiness.

Furthermore, that they meant to declare the enforcement of those rights to all men might only follow as fast as circumstances permitted.

It was therefore not surprising that Frederick Douglass would declare in 1876: “Lincoln was a white man, and shared the prejudices common to his countrymen toward the colored race.”

Nevertheless, Douglass concluded that Lincoln’s seemingly unfriendly attitude toward the Negro might be forgiven since he did what he had to do to accomplish his mission of saving the country from dismemberment—and freeing his country from slavery.

Mr. Striner presents a very well balanced study in Lincoln and Race. The reader is led through several corridors full of seemingly contradictory evidence about Lincoln as a politician who used the race issue to his advantage.

In that last corridor, however, we see that Frederick Douglass was right when he declared in 1865 that Abraham Lincoln was “emphatically the black man’s president” and free of any intrinsic bias.

Students of the Civil War era will find this study very helpful in understanding Lincoln’s attitude as politician and as president toward race.