City of Sedition: The History of New York City During the Civil War 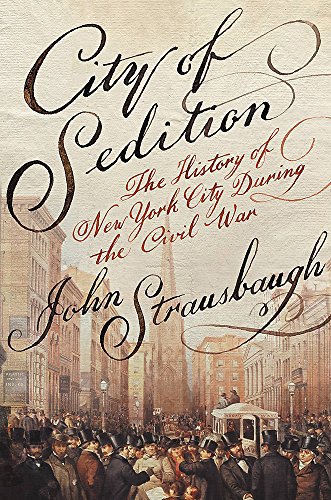 The author might have led the reader to think of New York City as chock full of sedition during the Civil War. It may have had more than its share. But the reader will find that Strausburg goes far beyond chronicling the seditious elements and develops a much more complete 19th century history of that city.

During the first quarter of this fascinating study, the author leads us to understand the various elements that made New York what it was in 1860. From a city of 36,000 citizens in 1790 it doubled to a metropolis of 60,000 ten years later. By 1860, it had grown to a population of 813,000 residents with another 267,000 living in neighboring Brooklyn. That growth came as its importance to the nation grew.

The port of New York was the largest and busiest in the United States. Two thirds of the goods imported to the United States came through the New York port and thus most of the tariff revenue supporting the Federal government. It had become by this time the nation’s center of banking, shipping, and cotton. Almost forty cents of each dollar earned from cotton stayed in New York where almost 100,000 Southerners lived and worked.

In addition, right up to the secession winter of 1860–1861 New York City was the center of the country’s very lucrative slave trade. The author contends that no Free State City in the Union was more pro-southern than New York. And few northern cities were more opposed to the election of Abraham Lincoln in the fall of 1860.

Lincoln carried the state of New York that fall, but not the city. Following his election, all the newspapers in New York urged him to do whatever was necessary to calm fears in the South and do whatever necessary to being the seceding states back into the Union. Business owners and workers alike sent petitions to Washington City urging reconciliation. They feared for their economic survival.

The fear of war and the interruption of business with their best customers in the South was the predominant issue discussed in the city. Rallies were held, meetings attended, petitions sent—all urging leaders north and south to seek accommodation and maintain peace between the two sides.

On his way to Washington City and his inauguration, Lincoln visited New York on February 19, 1861. His presence was virtually ignored. Walt Whitman described it best: “There were no speeches—no compliments—no welcome—as far as I could hear, not a word said.”

And, despite a large crowd lining the streets on his way to the Aster Hotel, the scene was strange according to Whitman.

“[Lincoln] possess’d no personal popularity at all in New York City and very little political . . . The result was a surly unbroken silence, such as certainly never before characterized so great a New York crowd.”

The crisis continued beyond Lincoln’s inauguration and so did the anxiety of the people of New York. Fearing that all efforts at reconciliation were failing, the editors of the largest New York newspapers offered editorials suggesting that the best course of action was to allow the seceding states to go in peace.

During an April meeting of New York businessmen to discuss their next course of action, the attack on Fort Sumter was announced. One attendee voiced what everyone in the room was thinking, “My God, we are ruined.”

But instead of economic ruin, war brought great prosperity to New York City. In fact, war profiteers, aristocrats, industrialists, capitalists, and Wall Street traders all came out of the Civil War with enormous wealth. During the conflict there were seditious actions committed and well-chronicled opposition to the war. But no city provided more volunteers for the Union army or more money and material to fight for the cause of union and freedom.

Thus far in his study, Strausbaugh gives the reader a pre-Civil War history, rich in facts and anecdotes, of New York City and its leaders. But he continues to enrich his study with a description of what the leaders of this city did with the wealth they earned during that war and after the conflict. It was during this period and with that enormous wealth that New York City would become the financial center of the world.

Those interested in a deeper understanding of why New Yorkers, its leaders, and working class citizens opposed the election of Lincoln and how they responded once war was upon the land should read this book.