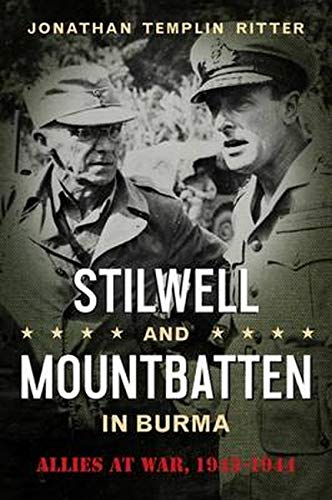 Jonathan Templin Ritter writes Stilwell and Mountbatten in Burma focusing on the collaboration of two extraordinary men who, “grew up an ocean apart, were thrown together by the fortunes of war during a twelve-month period, and never saw one another again.”

Rather than focus on their relationship during that short period of time, this is the story of the relationship between the United States and Great Britain as it was tested in the Southeast Asia (Burma-India-China) war theater.

Beyond the overall goal of defeating Japanese forces in Southeast Asia and in particular the India-Burma-China theatre, it is fascinating to read of the divergence of objectives (sub-goals) pursued by the two nations.

In fact, Winston Churchill announced, “I have not become the King’s First Minister in order to preside over the liquidation of the British Empire.”

To the contrary, the American position was clearly expressed in a Life magazine, “Open Letter to the People of England:” “One thing we are sure, we are not fighting to hold the British Empire together.”

So the underlying objectives of the wartime allies were different. And this had an effect on the relationship of Mountbatten and his deputy, Stilwell.

As Ritter points out, Mountbatten’s focus was on recapturing Singapore. On the contrary, the United States strove to spread democracy. Toward that end, the agent of the United States, General Stilwell, argued for using valuable resources in support of China.

Ritter writes a well-researched study of the Anglo-American effort against Japanese forces in the Burma-India-China theater. He clearly shows how the two leaders, Mountbatten and Stilwell were pulled in support of opposing objectives. In fact, it became obvious that the two leaders were seldom in agreement on either political or military objectives.

It became so tense that the two men seldom spoke. After President Franklin Roosevelt recalled Stilwell under pressure from Chiang Kai-Shek, Ritter writes that If Kai-Shek hadn’t successfully pressured FDR to recall the plain-speaking Stilwell, it would have been Mountbatten.

For the reader who wants a rare and thoroughly researched look at the effect of such infighting, Stilwell and Mountbatten is the book for you.